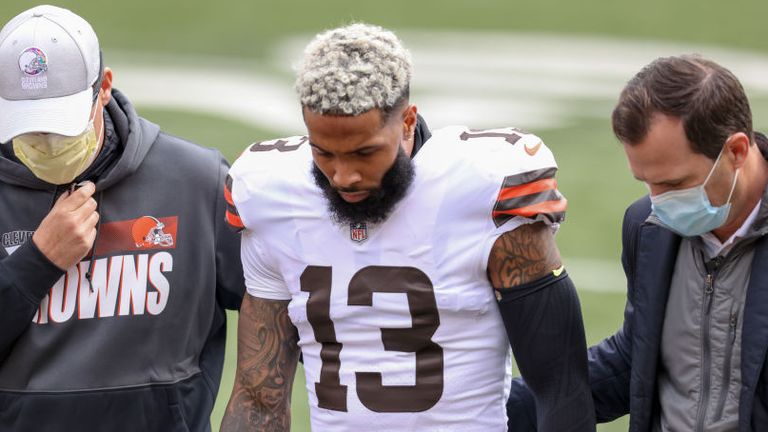 Odell Beckham Jr. is expected to miss the rest of the season after suffering an ACL injury in his left knee during Cleveland Browns’ 37-34 win over the Cincinnati Bengals on Sunday.

The wide receiver was involved in an awkward first-quarter collision while attempting to chase down Darius Phillips after he had intercepted Baker Mayfield.

Beckham received treatment on the field and was taken straight to the locker room. An MRI Monday confirmed Beckham tore the ACL in his left knee.

OBJ had entered the game with 23 catches for 319 yards and three touchdowns, and off the back of a down week last Sunday in which he had just two catches for 25 yards in a heavy defeat to the Pittsburgh Steelers.

He has three years remaining on the five-year Browns contract he signed in August of 2018. Dalton knocked out of Cowboys defeat

In other major injury news from Sunday night, Dallas Cowboys quarterback Andy Dalton was knocked out of their game against Washington after a brutal hit from linebacker Jon Bostic.

Dalton was motionless on the turf before regaining his senses and being helped to the locker room as he exited the game with a concussion. Bostic was ejected from the game for the hit.

Cowboys head coach Mike McCarthy was left less than pleased with his team’s response to Bostic’s hit on Dalton.

Rookie Ben DiNucci entered the game for the Cowboys at QB as they slipped to a heavy 25-3 defeat. The Cowboys announced after the game that Dalton was “alert” and “in good spirits”.

Washington were dealt an injury blow of their own, with safety Landon Collins believed to have suffered a season-ending Achilles injury.