Justin Olam brings the power and Josh Addo-Carr brings the pace – together they hope to continue the Melbourne Storm's legacy of winning grand finals.

The pair will man the Storm's potent left edge against the Penrith Panthers in Sunday's NRL grand final, with Olam a centre from Papua New Guinea and Addo-Carr the flying Indigenous winger from Sydney.

Olam's first exposure to rugby league was watching PNG great Marcus Bai star with the Storm in their 1999 premiership win, which was the club's first title. 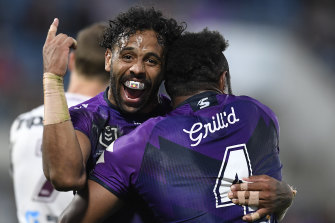 Josh Addo-Carr and Justin Olam celebrate a try during round 16. Credit:Getty Images

Olam dreamed of emulating Bai but he never imagined 21 years later he would be doing just that.

"It was the Storm grand final, the first premiership. That was my first NRL game I saw," Olam said this week.

"We had to come down to another town on the coast for a ceremony. I didn't have TV at my place. We were at this other town, that's how I watched it."

Both men arrived in Melbourne late in 2016 for pre-season with Olam having starred with PNG Hunters in the Queensland Cup and Addo-Carr signed from Wests Tigers.

Addo-Carr, now 25, proved a hit right away, showing a work ethic and temperament some in Sydney told the Storm he didn't have. He has barely missed a game since. Olam's parents didn't allow him to play until he was at university, where he studied applied physics, but he quickly moved up the ranks in his homeland.

Olam didn't break into the side until middle of last season but his powerful running and painful tackling quickly won fans over. He predicts 'millions' of people back in PNG will gather around televisions to cheer him on.

"I want to put in everything for them," Olam said.

The duo have used the Storm's coaches to develop into stars and their combination of power and speed, along with the guidance of Cameron Munster and Kenny Bromwich, has seen that edge become the Storm's most potent.

But Olam said defence would be the key.

"We definitely have some good players on our side with Munster, Kenny Bromwich, so that takes a lot of work out of my hands, I just have to listen to them and follow what they say," Olam said.

"My focus is on defence. I try to be dominant."

Addo-Carr will likely play his last game for the Storm as he is seeking to move home to Sydney and Olam is one of the teammates he will miss the most.

"I really respect him as a human being," Addo-Carr said.

"He's really proud of his people and where he comes from. We have got that same connection, I'm really passionate about my people too.

"We call him the human brick. He's built like a brick."

Addo-Carr said everyone at Storm loved Olam's fearless running from day one.

"He would run harder than anyone, run dead-straight at anyone. You would see that at wrestling sessions, trial games and in the Q-Cup," Addo-Carr said.

"In my opinion, he is the best centre in the game – both attacking and defensively. It's an absolute pleasure playing alongside him and sharing the field together."

Olam admits his biggest adjustment has been to Addo-Carr's elite speed.

"He's such an amazing player and his speed is a weapon we use," Olam said.

"We are always working on our timing, especially my passing to him. If I pass it too slow he might run past the ball."

Addo-Carr played in the 2017 premiership and desperately wants to leave as a two-time winner while Olam was in the stands in 2017.

"All of our senior players have grand final experience but we have a good mix of young players who have never been here before," Olam said.

"We are hungry and we want to make memories for ourselves."