NSW coach Andy Patmore has named skipper Kezie Apps and Isabelle Kelly in his run-on side for the women's State of Origin after the pair recovered from serious injuries.

The inclusion of the Dragons duo is a huge boost for the Blues, who are looking to claim their third-straight Origin win on Friday at Sunshine Coast Stadium. 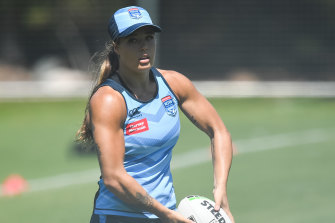 Kelly was seen screaming in pain after the weight of Broncos star Amber Hall fell on her ankle during an awkward tackle during the game.Credit:NSWRL images

Kelly was seen screaming in pain after the weight of Broncos star Amber Hall fell on her ankle during an awkward tackle during the game. The tackle followed a nasty hair-pull that saw Hall suspended from the game for a week.

"They were pretty horrendous injuries, especially Issy," Patmore said. "I took a deep breath when I saw that happen."

The Blues squad are completing two weeks of hotel isolation after flying up to the Twin Waters Hotel on the Sunshine Coast on October 30.

Patmore said naming Apps and Kelly in the 20-player squad had been a "risk" given no other players could be brought into the camp if needed due to the COVID-19. But he always had quiet "confidence" the duo would be fit by November 13.

"If they were in braces coming into camp I probably wouldn't have brought them," Patmore said. "You like to go in clean, knowing that everyone is fit and ready to go. Having two weeks, I just had to trust the medical staff."

Both Apps and Kelly will provide some much-needed experience in the young Blues side, with Patmore recognising how the Broncos form will transfer to the Maroons squad this year.

"I rely on those two," Patmore said. "When they speak, it's not over-speak, it's direct. They understand the situation from all the big games they've played. They've been here before."

The Queensland side features 12 Broncos players in the 20-player squad, meaning the majority of the team is coming off the back of a three-peat NRLW premiership.

"Their combinations are outstanding," he said. "They're going to be a big improvement of last time we played them. We've been spoken about all of those dangers and we've got to be at our best." 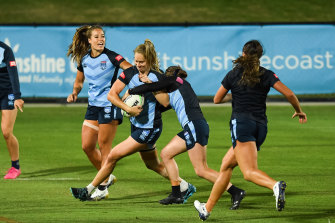 Both Apps and Kelly were injured in week two of the NRLW competition and ruled out of the rest of the season.Credit:NSWRL images

The coaching staff has sat down with Broncos star Millie Boyle who also plays in the Blues camp to gain some insider information on the "abilities and qualities" of the squad.

"Millie is certainly someone we've had some good chats to for some insight," he said. "She's given up a little bit. She is a Blue through and through and she is just as desperate as anyone to prove herself on Friday."