Garry Hughes has welcomed the prospect of helping to heal the rifts at Canterbury, 16 years after his controversial sacking following the club's Coffs Harbour scandal, declaring: "It's always been my club".

Hughes is one of the candidates sounded out to fill the void at board level after directors Lynne Anderson, Paul Dunn and John Ballesty quit on Wednesday. Their decision ends the need for an extraordinary general meeting, which had been called by a bloc of disgruntled members to oust the trio. 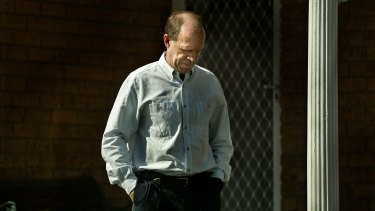 Garry Hughes is poised to return to the Bulldogs.Credit:Kate Geraghty

Hughes said he was grateful for the Anderson apology that ended the family's rift with the club.

"I was pretty strong on the fact that whilst the players deserved a big kick in the backside, they hadn't done anything legally wrong," he said of the 2004 Coffs Harbour scandal.

"My thoughts at the time were we should do what all good clubs do, stick together.

"But we chose not to. There were a few principles that were important to us. We didn't just throw our life memberships back just for the sake of it, we gave a lot of thought to it.

"She and her board were prepared to do that, we accepted it and we moved on."

Arthur Laundy, the boss of Bulldogs major sponsor Laundy Hotels, had threatened to sever ties with the club if the boardroom battles had any impact on his growing influence at Belmore. However, Laundy has welcomed the prospect of Hughes returning to the fold.

"Arthur is like me, we both grew up in the Canterbury-Bankstown area," Hughes said."I had a little involvement with Arthur close to 15 years ago when he and a good mate, Jeff Robinson, got a team off the ground called the Chester Hill Rhinos, who played in the old Metropolitan Cup.

It has been a dismal year for Canterbury, the team finishing 15th on the ladder and were regularly in the headlines for off-field incidents. The club has seemingly been at war with itself as factions fight for control of the boardroom.

Hughes is hoping that will soon end.

"Definitely. Everybody knows that in even the best families, you're going to have a disagreement," he said. "As long as you handle disagreements the right way, stick together and move on, that's hopefully what we can do in the future."