Former South Sydney star Sam Burgess has stood down from his roles as Rabbitohs coaching assistant and Fox Sports commentator following serious allegations of drug use and domestic violence.

NSW Police and the NRL integrity unit have launched separate investigations into allegations levelled against the former South Sydney skipper. 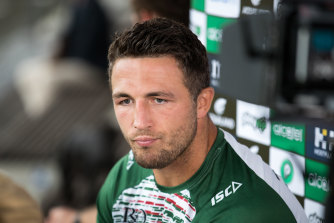 The NRL will investigate the allegations against Sam Burgess.Credit:Janie Barrett

"Police have commenced inquiries and as these inquiries are in their infancy, no further comment will be provided at this time."

Australia Rugby League Commission chairman Peter V'landys told 2GB on Friday that, as far as he was aware, the NRL had no prior knowledge of the claims.

"It would be totally inappropriate to comment on this specific case. I don't have sufficient facts. Like anyone else in the community, you have to provide due process and natural justice and Sam should be afforded that," he said.

"But in this instance, I think that the appropriate action is to investigate it, get all the facts, and make a judgment after that.

"Once we have all that information, all the facts, and everybody's version, we will make the appropriate decisions."

The Australian newspaper reported Mr Burgess received medical attention during a drug-fuelled episode in 2018, and a club doctor allegedly injected him with liquid tranquilliser, obtained through a prescription written in someone else's name.

Abdo said the club doctor would still be allowed to work at the club until the investigation was complete.

"Because these are allegations, we don't have the facts before us we are not going to be taking any further action until such time as we have the information needed to do that," he said. "However I believe Sam Burgess has stood himself down from South Sydney Rabbitohs duties this weekend and I also believe he has stood down from Fox Sports."

Mr Burgess retired from the NRL at the end of the 2019 season after suffering a chronic shoulder injury. He is now an assistant coach with the club. The English import signed a four-year extension with the club in 2018 and was signed to play with the club until 2023.

He led the club to the premiership in 2014, after breaking his cheekbone in the opening tackle of the grand final against the Bulldogs.

The allegations come on the eve of the finals. The Rabbitohs finished in sixth place this season and face the seventh-placed Knights in a sudden-death play-off at ANZ Stadium on Sunday.

Sports news, results and expert commentary delivered straight to your inbox each day. Sign up here.