Melbourne Storm skipper Cameron Smith has capped off the club's premiership-winning season with his eighth player of the year award.

The 37-year old's win comes 15 years after his first player of the year award in 2005 and it follows the same path as the 2017 season when Smith claimed the honour in a premiership campaign. 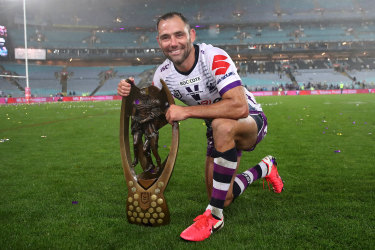 Smith has yet to confirm his plans for next season as he mulls over whether to retire or play on. He was also among the best players in the club’s 26-20 win over Penrith Panthers in the NRL grand final on Sunday.

The Storm's backline was heavily represented in the awards with emerging Fijian winger Isaac Lumelume winning the Cooper Cronk feeder player of the year award for his work at training during a season when the Queensland Cup competition was not held due to COVID-19.

Lumelume earned three first-grade games and looks a leading prospect to replace either Suliasi Vunivalu (Rugby Australia) or Josh Addo-Carr (going home to Sydney) who are leaving the club.

Storm fullback and Clive Churchill Medal winner Ryan Papenhuyzen won the members' player of the year while centre Justin Olam was named most improved player at the club awards ceremony which they hosted at their Sunshine Coast resort on Tuesday night.

Young prop Tino Fa'asuamaleaui was rewarded for his rise into the Queensland state of origin squad by being named Billy Slater rookie of the year after playing every game bar one while utility forward Brandon Smith won the best forward award.