Geelong will need to execute their plan to perfection to prise the 2020 premiership cup from Richmond's iron grip as they head into the decider at the Gabba on Saturday night as slight underdogs against a Tigers team that has won two of the past three flags.

The Cats' champion skipper Joel Selwood – who played in three flags with Geelong before becoming captain in 2012 – said their challenge was clear as they knew Richmond would not just hand over the title. 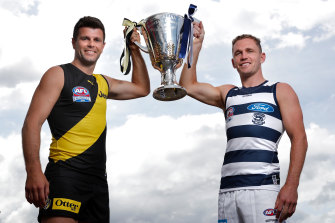 Both coaches said they would take unchanged teams into the grand final with Scott set to join Hardwick as a two-time premiership coach if the Cats prevail at the Gabba.

Scott said although the Cats were confident that their plan could beat the Tigers, its execution under pressure remained Geelong's big challenge. He said Richmond deserved to be slight favourites.

"I'd said over and over again they have clearly been the best team of the last three or four years, there is no doubting that," Scott said.

"They have been the benchmark and they should – and I am sure they do – have real confidence in their system."

Selwood will lead the team into a grand final for the first time after playing in three premierships before he turned 24 and will played alongside Gary Ablett for the final time in their fourth grand final as teammates.

Selwood said the desire to send Ablett off in style would provide "very little" extra motivation, however he hoped they would be able to celebrate together at the end of the match.

Cotchin will become the first Richmond player to be a three-time premiership captain if the Tigers win and the eighth person in the game's history to be captain in three flags.

The Tigers are looking to win back-to-back flags for the first time since 1973-74 with Cotchin defending their culture despite a number of off-field incidents throughout 2020.

"We are really proud of what we have created and continue to create," Cotchin said.