Just seven days before the Cats turned this venue into a Gabbatoir for Collingwood, they were viewed as tired, slow and old enough to be a super rules side.

Collingwood supposedly had the momentum of winning in Perth, the sudden confidence of upsetting West Coast and no fresh injuries. They'd beaten the Cats during the season, on the back of Jordan De Goey's five goals. 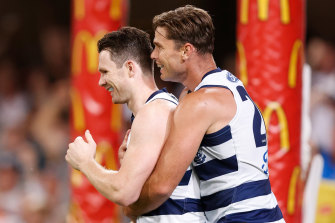 Dangerfield has performed well in finals, as he does in most games, but on the whole, has not ripped those games apart in the manner of Dustin Martin, who has proven devastating in attack and midfield.

Tom Hawkins, meanwhile, had fluffed his chances against Port, missing first difficult chances, then the ones he should have nailed.

In this slaughter in Brisbane, Dangerfield, Hawkins and Mitch Duncan typified the Geelong approach – powerful, strong at contest and unwilling to concede anything – not giving the hapless Pies a sniff of an easy ball.

They would not yield a millimetre. Nor would their teammates, from the great Gary Ablett to Sam Simpson, the last man picked. Geelong’s aversion to another finals defeat – their desire to remain in the premiership race – was evident from the first bounce, the first touch, the first tackle, until Hawkins' fourth goal and 600th career major with a minute left. 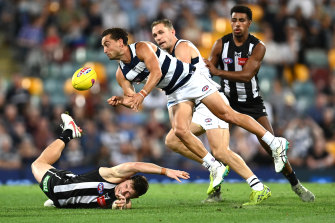 Luke Dahlhaus gets a handball away against the Pies.Credit:Getty Images

Geelong's domination was such that Dangerfield didn't need to play like he wore a cape, although he delivered nonetheless – especially when stationed forward in the first half. The Cats were supreme in all facets of the game – forward entries (25-11 to half-time), clearances (20-9 to the half). The possession tally to this point was 181 to 104 – and bear in mind these were shortened quarters.

Dangerfield's resolve was evident in a defining moment, early in the second quarter, when he crashed into a contest and stopped three Magpies from marking or taking the ball, leading to a Luke Dahlhaus goal.

For Chris Scott, who quietened, at least temporarily, the legion of blue and white critics that arose last week, the question of Dangerfield's role – the proportion forward and midfield – will be an important consideration against the Lions.

Duncan did as he wished, as did Tom Stewart behind the ball, where the Collingwood forwards were the recipients a) of very little ball and b) inept delivery.

Collingwood's failure was comprehensive, to the point that the Pies did not kick a second goal until early in the final quarter and were threatening, at that stage to register the club's lowest ever score in a final, 1.5, back in 1898. Consolation goals were little consolation.

The carnage started in the middle, where Brodie Grundy was utterly ineffectual and gun midfielders Adam Treloar, Taylor Adams and skipper Scott Pendlebury were out-bustled- Adams suffering an arm injury that he carried in the second half. De Goey, out of contract, didn't rise for the occasion.

Most damning for the Pies, their defence – the unit that, amid a difficult season, had stood up and never wilted – was dismembered by Geelong's combination of slick movement, precision and willingness, above all, to fight.

The Pies were broken. But they were busted by an outstanding Geelong, which, as Dangerfield and Hawkins reminded, have a point to prove.