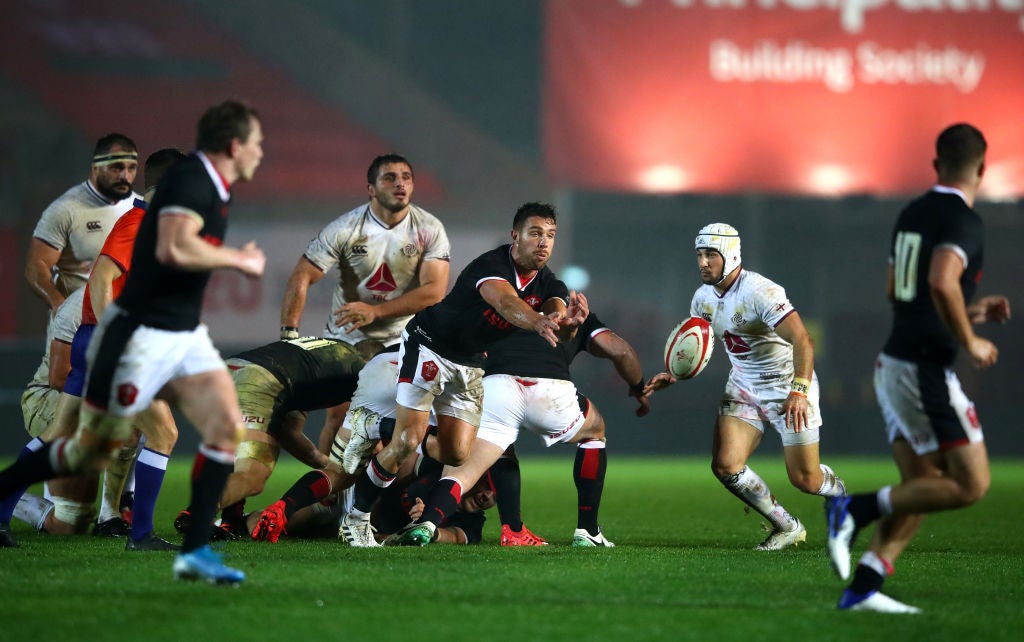 Wales’ scrum has struggled of late but it’s amazing how much of a difference a change in personnel can make as Scarlets prop duo Wyn Jones and Samson Lee destroyed a Georgian pack with a big reputation.

And the scrum allowed Sheedy to open his international account with a successful penalty from 35 metres out after the visitors were penalised at the set-piece. Georgia were forced to defend for the opening quarter of the game as Wales lay siege to their try line with 79 per cent of action being played in the visiting half.

Wales had to be patient, but they eventually breached Georgia’s defence when a well-timed floating pass from Sheedy to put Gloucester wing Rees-Zammit over for a simple try at the far left-hand corner. Sheedy added the extras with a looping kick from the touchline.

It took half an hour for the Georgia to finally show their teeth with a powerful driving lineout from five metres out forcing the hosts to concede two penalties in succession, but Wales’ defence held firm.

Despite Wales’ forward dominance their attack never quite got going as they more lost their shape after a few phases with a lack of carrying option to get over the gain-line an obvious problem for Pivac’s men.

Abzhandadaze had an opportunity to put the Lelos on the board at the stroke of half-time but his penalty drifted wide meaning the hosts turned around with a 10-0 lead.

Wales began the second-half positively with Sheedy extending their lead with a simple penalty from right in-front of the posts. The hosts finally burst into life with a searing 40 metre break from Rees-Zammit from deep inside his own half.

But the teenagers break came to nothing as captain Justin Tipuric was tackled high after having the ball dislodged by a swinging arm from his opposite number Beka Saginadze. Referee Luke Pearce was forced to consult with his television match official Joy Neville who adjudged Saginadze’s tackle to be high.

But there were enough mitigating factors to award the Georgian openside with a yellow card rather than a red. Tipuric was forced off the field with replacement scrum-half Rhys Webb handed the captaincy after replacing Hardy.

Wales began to build pressure from the resulting penalty but yet again they failed to find a way to unlock the Georgia defence with this attack breaking down after Webb forced a miracle offload which was never on.

The hosts threatened to break away on numerous occasions with Botham on his debut making a powerful run into the opposition 22 but yet again the ball was turned over.

This game had lost all shape and if there had been a crowd present the Mexican waves would have been prevalent throughout given the turgid nature of this contest.

Confidence was clearly lacking in this Wales side and the longer the game progressed the more dangerous the visitors looked with the ball in their hands. But Wales ended the game on a high with a well-constructed try.

A powerful carry from inside centre Williams got Wales over the gainline. The ball was quickly recycled with some neat handling from Sheedy releasing Rees-Zammit who burst clear before drawing his man to put Webb over for the try.

Sheedy’s conversion drifted wide and although it wasn’t a perfect performance Pivac would have been relieved to claim his first win of the autumn.