Tom Lynch has been a transformational player for the Richmond Football Club. Without him, the Tigers would not have won the 2019 premiership.

Without him, they couldn't beat the Brisbane Lions last week. Had Lynch played – and his prospective opponent Harris Andrews hadn't – there's a fair argument that the Tigers would have been straight into the preliminary final, rather than having to deal with an admittedly inferior St Kilda in a cut-throat semi-final.

Without him, the Tigers would find it much harder to beat Port Adelaide in the preliminary final.
Without him and his hulking presence, they might have beaten the Saints, but the outcome wouldn't have been as inevitable. 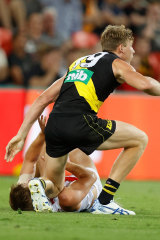 The moment in question.Credit:Getty Images

Lynch will face match review officer scrutiny – again – for dropping his left knee on defender Dougal Howard in the third quarter, in what was clearly an intentional act.

Two factors are in Lynch's favour. One is that there was not much force in Lynch's action and Howard was not hurt – he played out the game, with no apparent issue – and the AFL's justice system places significant store in the consequences for the victim of any reportable offence; had Howard been hurt – and this was demonstrated in St Kilda's medical report – Lynch would be in strife and the Tigers heading to Adelaide without their most important player, bar Dusty Martin.

The other factor, which the AFL would deny, is that there's often leniency shown towards important players during the finals where match review/tribunal decisions arise.

So, much as the incident was unsavoury, unnecessary and another lapse of ill-discipline, it would be surprising if Lynch got a week.

This game underscored the two themes surrounding Lynch this season.

One is that he's hugely important to Richmond's forward structure, given the contest he provides, the packs he crashes, creating goals for the swarming, highly skilled quicksilver smalls such as Shai Bolton and Shane Edwards, who shared in five important first-half goals.

Jack Riewoldt is not quite the potent forward of 2017, and he's not 200 centimetres. When they played the Lions, Riewoldt was smothered, and the smalls didn't have the Lynch reference point for high balls.

Very few key forwards in the AFL provide that kind of pillar that holds up a forward line.

Further, Lynch has a knack for kicking a goal when the situation demands it, despite his errant boot in the second half of this final (0.5). He contributed two of Richmond's super efficient 9.1 to half-time.

His first set the tone for his side, as he marked one-out v Howard, his undersized opponent, in the opening minute and nailed the shot from 45 metres on an angle.

The other, less laudatory theme surrounding Lynch of 2020 has been his propensity to commit these off-the-ball acts that put him on the edge of suspension, as he did when he punched Gold Coast's Sam Collins in the midriff and when he pushed Lion Alex Witherden's head into the turf and got Bomber Michael Hurley high.

None of these were heinous, which is why he's averted suspension, although MRO Michael Christian did send him to the tribunal for the Hurley incident, only to evade consequence.

In this game, both of these leitmotifs of Lynch's season came together. He was enormously influential in Richmond's victory, despite the profligacy of booting 2.5. Had he been on target, he'd be close to the best player afield.

The significance of Lynch was further underlined by the contrasting efficiency of the two sides. The Saints were incredibly labour intensive when searching for goals. They missed shots, missed open teammates and often needed several efforts to create a chance.

Conversely, the Tigers couldn't miss in the first half, when the match-winning advantage was built, and while Lynch himself was awry in his conversion, the smalls at his feet were unerring in their accuracy when it mattered.

He was crucial, and he will remain so in Richmond's premiership campaign. Without him, the Tigers aren't the same.