Melbourne intend to re-sign versatile forward Mitch Brown for another season after extending Luke Jackson's contract by two years on Wednesday in a deal that ties last year's No.3 pick to the club until the end of 2022.

The Demons traded out back-up ruckman Braydon Preuss to the Giants for pick 31 and delisted Oscar McDonald on Tuesday but remain well stocked for talls with Ben Brown joining the club from North Melbourne during the trade period. 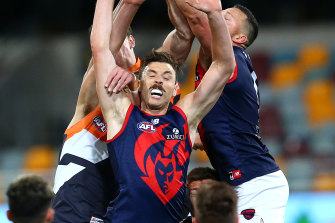 Melbourne intend to keep Mitch Brown on the their list.Credit:Getty Images

After not receiving serious offers during the trade period, Tom McDonald remains at the Demons where he is contracted until 2022 and is expected to adopt a different program to give him options to play up the ground or in defence.

Having spent the past two seasons outside the eight, the club is under pressure to make the finals in 2021 with the CEO Gary Pert restructuring the football department after a review. Alan Richardson will be the football manager responsible for performance while Josh Mahoney becomes responsible for facilities and administration.

The Demons' AFL men's team is expected to train in 2021 at Casey Oval with the club's return to Gosch's Paddock in the future dependent on the COVID-19 situation.