Snap Shot is a weekly column taking a look at the lighter side of football.

Snapshot loves making a Hollywood connection to the AFL as much as anyone but sometimes you just stumble on one without even trying.

This time it happened at the three-way practice match on the Gold Coast on Saturday involving a mixture of Geelong, Richmond and Port Adelaide players when Liam Hemsworth, star of multiple films including The Hunger Games and The Dressmaker, became the subject of conversation. 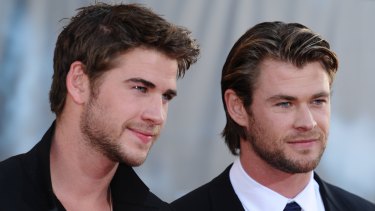 It all started after a dozen Port Adelaide players and assistant coach Matthew Lokan arrived on the Gold Coast on the same plane as the Cats and AFL officials returning from the qualifying final to play in a practice match to stay fit in case they earned a recall for the preliminary final.

Veteran pair Justin Westhoff and Sam Mayes pulled on Richmond jumpers while Port youngsters Riley Bonner and Mitch Georgiades dragged on Geelong jumpers but the talk was more about what lay ahead on the way home.

The crew were apprehensive but then excited to be sharing the same small chartered plane that regularly flies actor Liam Hemsworth – who is in Byron Bay at the moment – around the country whenever he is in Australia. 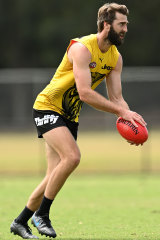 Their enthusiasm didn't even dim when they were faced with the prospect of having to land once – in Cobar NSW = on the way back to Adelaide to allow the plane to refuel.

Hemsworth's brother, Chris, appeared in an AFL launch ad the year after his beloved Western Bulldogs won the 2016 premiership with Liam also sharing his passion for the club that the Saints knocked out of the 2020 race on Saturday.

As expected Port's players arrived home safe and sound hoping the Hemsworth magic might rub off on them as they make a concerted tilt at the flag with Westhoff hoping any remnants of his Tigers' jumper have disappeared if he gets a chance to play in the preliminary.

The great Barry Round is around

With football on the Gold Coast it's impossible to avoid the presence of Brownlow medallist Barry Round who moved to Miami Beach 12 years ago, particularly when last week marked 30 years since he led Williamstown to one of the great VFA premierships in 1990.

That grand final was notable for the fact Bill Swan – the father of former Collingwood champion Dane Swan – kicked the winning goal as the Seagulls stormed home from 34 points down in the last quarter to beat Springvale.

Round, who was captain-coach, was best on ground, an unbelievable effort given he was playing in his 432nd senior game at the tender age of 40 having been joint winner alongside Fitzroy's Bernie Quinlan of the 1981 Brownlow medal nine years earlier while playing for the Sydney Swans. He is still the oldest winner of the medal, aged 31 years and 238 days when he won it. 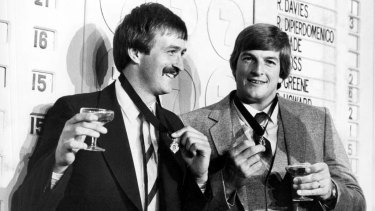 The beach life agrees with Round, now 70, who is in shorts and t-shirts all year round but he still takes a keen interest in the football heading to Metricon Stadium to watch the Swans play West Coast in round five this season. Occasionally he drops into watch the Suns play too, understanding the battles of being part of a frontier club.

He had a recent setback when the little toe on his right foot was chopped off earlier this year when it became infected but the 70-year-old has not lost the sense of humour that made him a popular player at two AFL clubs before he played 100 games with Williamstown.

"I'll be kicking with my left foot for a while," Round said.

When Snapshot suggested he couldn't remember seeing Round kick too often during his league career he didn't miss a beat.

"Mark Browning made sure I never got to kick it. I think every time I went to kick it he was there saying 'give it to me, give it to me'," Round said.

Browning had a booming left foot and has worked in Queensland football most of his life since his own career ended in 1987.

Round remembers the 1990 decider fondly with Geelong football manager Simon Lloyd playing at full-back that day as a 19-year-old with Round alongside him despite being 21 years his senior.

The ruckman is still in touch via WhatsApp with 16 former teammates from that team including Saade Ghazi, Ian 'Chops' Rickman, Tony Pastore and Grant Smith who form a punters club that holidays together at the end of the season with the winnings.

"We have a little end of season footy trip for mature aged gentleman now. It's not quite like the old footy trips, some of us still pretend," Round said.

He's earned it having led the Seagulls to a famous flag and he remains a big advocate in his own understated, informal way for the AFL in Queensland.

"It's going to go ahead for sure," Round said.