Melbourne may have won the grand final but Cameron Smith did not use his on field post match interview to call time on his illustrious career.

Smith was one of the Storm's best players in the 26-20 win – in which he eclipsed the all time point scoring grand final record. 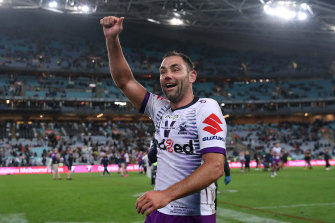 Clive Churchill Medallist Ryan Papenhuyzen was emotional just minutes before being awarded one of the game's highest individual honours.

"You're so confident in the boys but [Penrith] coming off 17 in a row, it's the most butterflies I've ever had.

"These boys – we've done it so tough this year because back home, they're doing it a lot tougher than we are. That's unbelievable. I'm so proud of the boys and I never thought I could do one of these. We've done it."

Papenhuyzen bought surplus tickets to the match for one reason.

"I made sure I bought heaps of tickets in a good section because you don't know how many grand finals you're going to play," he said.

"I'm so happy [my family] are here. I wish I could go give them a hug. We're going to celebrate alright."