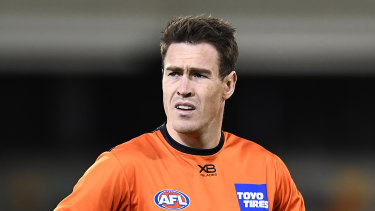 While this has placed enormous pressure on their salary cap, Silvagni suspects players no longer believe the current crop of Giants can land the ultimate prize.

"I don't know whether it's about money, I think they may have missed their chance of winning a grand final," Silvagni said.

"You look at the Richmonds, when you win one [a premiership], generally you can keep the group together.

"These boys, they're close, I know they are close up there, but the fact they’ve possibly missed that chance to nab a grand final win, I think that's hurt them.

"I really believe, probably, not so much this year but the previous three to four years they were a realistic chance to win a grand final. They've missed that chance. I think the players have seen that opportunity maybe slip and they've opted to go elsewhere."

Silvagni says the Giants should force the Cats into a trade by matching the offer for restricted free agent Cameron, and ask for a young gun such as ruckman Sam de Koning, the No.19 pick from last year's draft.

"I don't know the money there, they're saying 750 for five years, I don't know. I would think that the Giants could match that offer not a problem," Silvagni said on SEN radio.

"I'll pull a player out of the hat. Sam de Koning, who's Tom de Koning's brother, who's 202cm, key position player. Go get your pick and get a really good young player through the door."

Silvagni said the Giants needed to take a longer-term view with their list.

"The concerning thing for the Giants is they can't panic here, particularly during this trade period. They've got to reset," Silvagni said.

"You can look at it and go "we're losing these players, how are we going to replace them for next season?"

Caldwell's request continues a cycle for the Giants where the elite talent they recruit are poached after two to three years only to be replaced by more high picks who are also lured away – a trend which Silvagni said the club should be "extremely worried" by.

"Jye has informed us that he would like to return home to Victoria," the Giants football boss Jason McCartney said.

"We had tabled a very competitive offer for a second-year player but we'll now work to facilitate a trade that will provide a strong result for our football club."