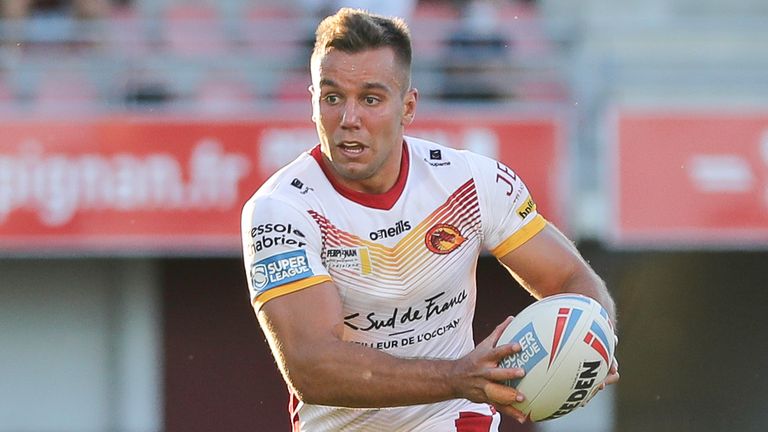 He has been one of Super League’s breakout stars since the competition resumed in August, but it is barely five years since Tom Davies was almost lost to rugby union.

Given the finishing prowess he has shown which has seen him score 12 tries in nine appearances for the Dragons – putting him as Super League’s joint-second highest try-scorer with Bevan French, no less – and propel the French side into the play-offs, it may seem surprising the winger’s talent went unnoticed for so long.

Overlooked for town and county representative honours in his youth, and then let go by Leigh Centurions’ youth set-up as a teenager, Davies was left disillusioned and thought his dreams of making it professional had been shattered.

But the guidance of his old coach at amateur club Wigan St Patricks set him on the path to Super League, first with hometown club Wigan Warriors and now lighting up the league in Perpignan.

“I never really made any town teams or anything growing up. In fact, I used to be a half-back for a while – I was probably the only half-back in the league who couldn’t pass!

“I gave up on it all together and when I was 16, I was playing at St Pats and a man called Glenn Sweeney, who has been my coach since then and I wouldn’t be where I am today without him, he did a load of speed work with me and agility, a load of skills and passing and really honed my game. 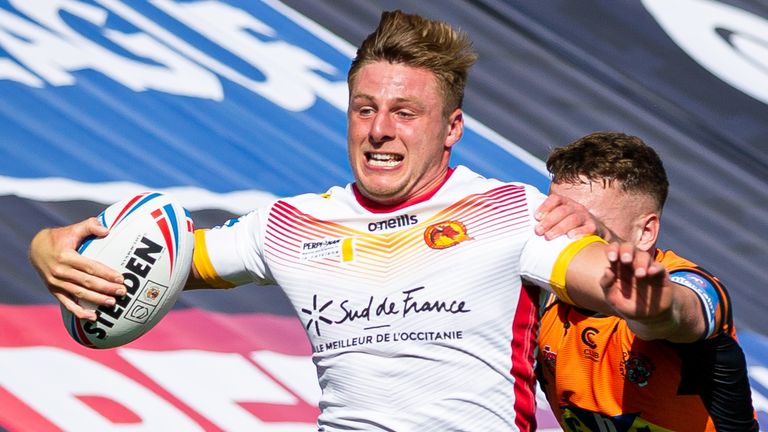 I never really made any town teams or anything growing up. In fact, I used to be a half-back for a while – I was probably the only half-back in the league who couldn’t pass!

“When I was 18, he suggested I go to full-back because it would suit me better and my coach at Leigh College said the same. I went there and things started to pick up really well.”

It was Sweeney who helped Davies get his foot in the door in the professional game as well thanks to some close contacts, albeit contacts in the 15-man code with Fylde in the third tier of English club rugby union.

Davies never looked back from being offered a trial after meeting with director of rugby and former England head coach Brian Ashton over a cup of tea in Blackpool. Indeed, it was Fylde head coach Mark Nelson, the former Sale winger, who spotted his aptitude for the wide positions.

“I just used to ask 1,000 questions at every training session – ‘Why do we do this? What is the best way to do that?’ – and the head coach at the time, Mark Nelson, he was great with me,” Davies said. 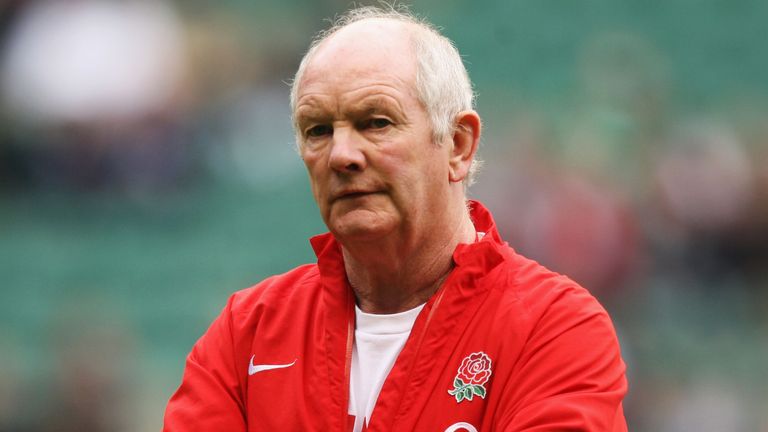 “He used to be a winger as well, so he was the one who said ‘I’ll get you playing full-back, but I reckon we’ll put you on the wing because you don’t really know what you’re doing and you’re inexperienced’. He told me everything to do and I really enjoyed my time there.

“As you can see within Israel Folau, and you look at Chris Ashton, Jason Robinson and Joel Tomkins when he went over there, the skills are definitely transferable.

“The thing is you can pick things up from different games. That for me is big and whatever you do, as long as it can improve you then give it a go.”

His return to league came about by chance as well, having initially been tempted back to St Pats by Peter Williams – father of England international George – to help them out when they were short of players for a cup tie. 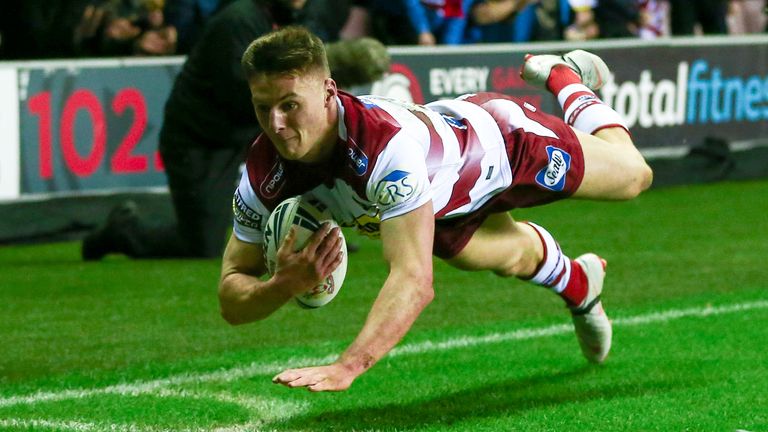 After two consecutive weekends of playing for Fylde on Saturday and league on Sunday, he was spotted by a Wigan scout and offered a trial, going with the blessing of his union club and eventually earning a full-time contract.

That led to him being part of the Warriors’ Grand Final triumph in 2018 and an England Knights call-up, but last year was curtailed after just seven appearances when Davies suffered a horror ankle injury in the derby against St Helens in April.

It has been a long road to recovery, but the 2020 season being interrupted by the covid-19 pandemic has, in a way, proven to be beneficial for the 23-year-old after moving to France on a two-year contract last winter.

“It’s strange, but the coronavirus actually came at the perfect time for me,” Davies said. 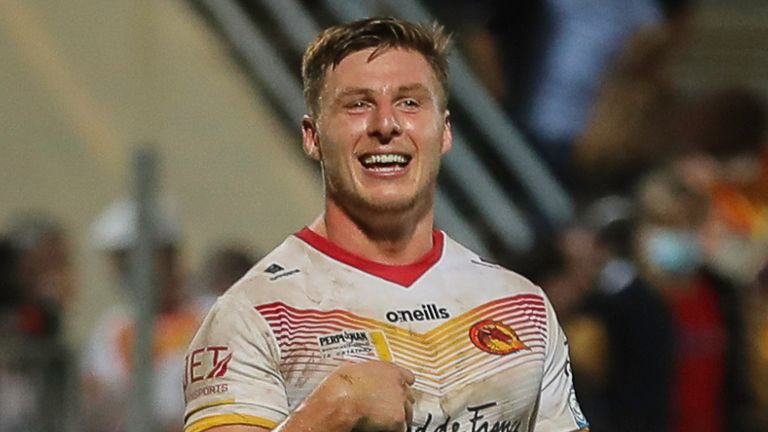 It’s strange, but the coronavirus actually came at the perfect time for me.

“We went into it in March and all I had in my head was get my ankle back to full strength and make sure it’s going well.

“Super League is the highest level in the British game and the level of fitness it demands, you can’t be 10 per cent off because you get found out whether it’s defence or attack if you’re taking shortcuts.

“I knew what I needed to do and having that nearly three months, I was going to the hills every day and doing my own sessions there. The team sessions gave me another six weeks of full fitness.”

Having had to wait until the season resumed in the summer to make his Dragons bow, Davies has wasted little time, although he is modest about his try-scoring efforts.

Great to be back again. Thanks to everyone for the messages 🐉 🐉 https://t.co/4km999GOLS

He credits the aforementioned Folau and Sam Tomkins for getting him in position to score – “A lot of the time I’m just having to finish a walkover, really; they’re doing all the hard work for me” – and hailed Dragons head coach Steve McNamara for giving him the freedom to play his own instinctive style of rugby.

Davies is now looking forward to tackling the play-offs with Catalans and they begin their quest for a maiden Grand Final appearance against Challenge Cup winners Leeds Rhinos on Friday evening at the Halliwell Jones Stadium, live on Sky Sports.

He could hardly have asked for a better opponent either because despite being a native Wiganer, Davies was a regular at Headingley as a Rhinos season-ticket holder in his youth.

“I used to support Leeds, so I love playing there and love playing against them,” Davies said. “If we can go there and get the win, that’s the main thing we need to do.”