Shanice Parker was just two years old when her mum made her Jillaroos debut in 2000 but is well aware of the struggle it took for her to get there.

Parker will make her State of Origin debut on Friday night, 20 years after mum Danielle stepped out for Australia at the women's Rugby League World Cup. Heading into the Friday night's game on the Sunshine Coast, the 22-year-old reflected on the legacy her mum left behind to make the women's game what it is today. 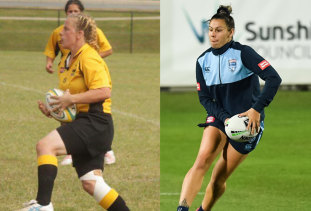 Shanice Parker will debut for her first women’s State of Origin on Friday – twenty years after mum Danielle debuted for the Jillaroos in the Rugby League World Cup.

One of their biggest barriers, Parker said, was simply growing up in Western Australia, where women's rugby league is not as developed as it is on the east coast.

The lack of women's league players in the area meant the pair would often play together, with mum and daughter also having represented WA together at a national level.

"She would run it straight at me because she was stronger and I'm a little twig," Parker said. "She shaped my mongrel, no-fear mindset." 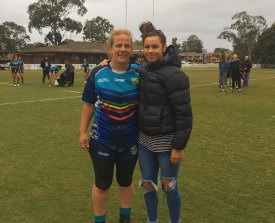 Due to border closures, Parker’s mum will be unable to attend the game, but will be there “in spirit”.Credit:Facebook

Being from WA, Parker never imagined she would play at an elite level like her mum. Then she was offered a contract with rugby sevens in 2016. The contract meant she had to move to NSW and leave WA, and her mum, behind.

"She legit pushed me out the door," she said. "We had a week to decide and I was gone in the two weeks."

After making her debut for the Roosters last year, Parker said she never thought in a "hundred million years" she would get the call up for Origin this year.

Parker has been named on the wing for game day and will pull on the No.2 jersey.

"It's a moment I never really thought I would be capable of getting to," she said. "Jess Sergis, Isabelle Kelly, I've always looked at those players as the optimal athlete in rugby league. I never saw myself putting on a jersey next to them."

Due to border closures, Parker's mum will be unable to attend the game but will be there "in spirit". Still playing rugby league at the age of 43, Danielle is now working to create better pathways for female league players in WA and was recently inducted into the NRLWA Past Players Hall of Fame. 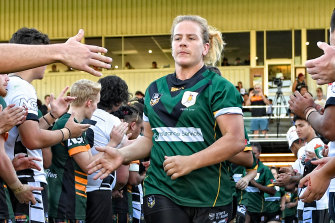 Still playing rugby league at the age of 43, Danielle is now working to create better pathways for female league players in WA and was recently inducted into the NRL WA Past Players Hall of Fame. Credit:Tom Campbell/NRLWA images

"She is trying to help out all the young girls now coming through . . . so they don't slip through the cracks just because of being in WA," she said.