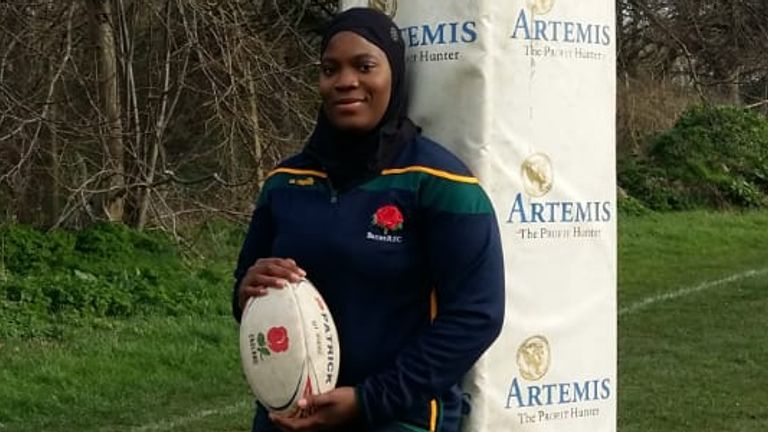 In the not too distant future, Zainab Alema hopes to be sitting on the sofa, cup of Earl Grey in hand cheering on a Muslim Woman playing for England.

If it happens expect tears, lots of them, because this woman known to her team-mates as ‘Bulldozer’ has spent her playing days smashing plenty of physical, emotional and cultural obstacles to get her there. 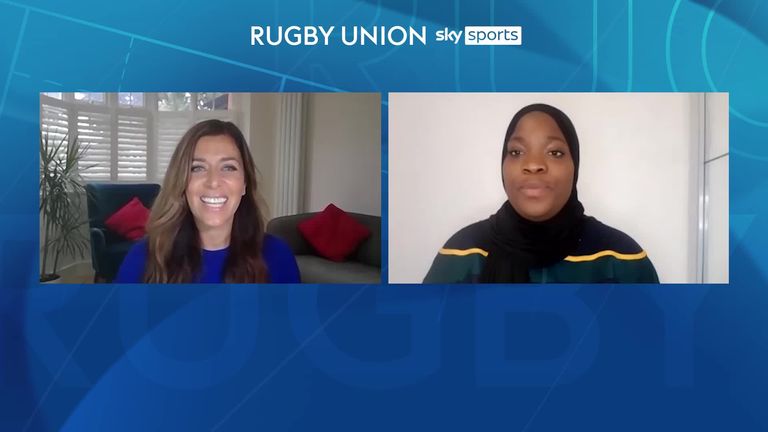 Growing up, Zainab never thought about playing rugby, she didn’t even know women could. But from the moment she first got “stuck in” during a PE lesson at 17, she relished every second of “feeling free and just running”. The game became intertwined in her life “like an old friend”. But like old friends, there were times she’d question the relationship feeling sometimes like an outsider, someone who didn’t belong.

From the moment she was born prematurely at only 26 weeks, she was a fighter and says she had an innate drive, “if I want to do something I try my hardest to get it done”. She liked sport at school but until that PE class, she never loved any sport. That same PE teacher who encouraged her to give it a go got her into a training session at Ealing Trailfinders, but even then Zainab’s rugby journey almost didn’t get started.

This time last year I made my transition to @barnesrfcwomen . What a year it has been! I joined when I was 3 months pregnant , trained pre-season until I was 5 months then had to stop because I was becoming a liability 👀🤣🤰🏾 Watching on the sidelines with my ever growing bump , there was nothing more I wanted than to be out there with my new teammates. I'm so Happy I chose this club as I've never felt so free yet connected to such an amazing group of women. Ready to smash it up in the upcoming season!! Can not wait!💥💪🏾💚💛 Bulldozer Love

“I was so excited to go to my first session and I got lost and the coach came to find me and by then the session was over. I was so mortified. I have lived in London all my life but I got totally lost.”

Accessibility, is she believes, one of the hurdles she had to overcome. “Often clubs are in secluded areas where you have to walk so far along the road before you actually get to the club. For me when I started at 17, I was going by myself by public transport. It was tough especially in winter, down dark streets. My team-mates had their parents dropping them off in cars but I had such a passion for the game I just carried on.” 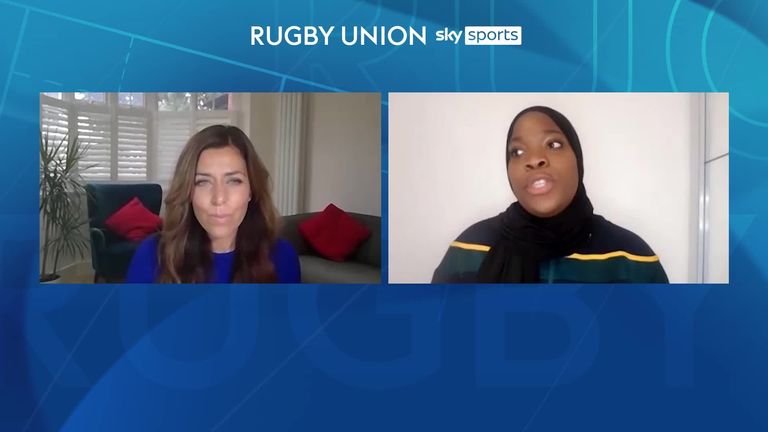 By far the biggest obstacle for Zainab has been her culture. She says she often gets stared at and commented on when she is in the park kitted up, complete with her hijab and rugby ball in her hand. Her dad couldn’t understand why an African Muslim woman would want to play rugby, “a male, elitist sport”. There are stereotypes she says of Muslim households, “women are supposed to be at home cooking, cleaning and having kids. That’s what we do to some extent but we can do so much more. I am determined to smash those stereotypes”.

It’s not been straightforward. While studying to be a neonatal nurse at university, she joined the rugby team but sometimes struggled to fit in, not just because of the way she looked.

“I felt a bit out of place because a lot of the time socialising was so alcohol-based. Not that the team would do it on purpose. We would have a pint for the Woman of the Match and I would win it quite a lot, and then have to nominate someone to have it, and it was so uncomfortable I wanted the ground to swallow me up. It may seem like something little to someone else, but it was those little experiences that were so difficult for me.

“I was the only black person on my team wearing a hijab and leggings under my shorts. I look different and all of that stuff played on my mind. I would end up just playing and then go, and when I look back it makes me feel a bit sad. I didn’t get that time to connect with my team off the pitch just because of that awkwardness.

“People say, you could just sit down and have a coke, which I do now, but I think in uni it is a bit different, I guess you go to the bar a lot more too.”

When she left university and began nursing she found something was missing in her life. She needed a way to release the stress so she began looking for a new rugby club.

She settled on Millwall and earnt herself her ‘bulldozer’ nickname. Her job as No 8 was to pick the ball up at the back of the scrum and smash straight into the opposition fly-half.

“The name is sort of a metaphor for what I’m doing and who I am. It smashes and demolishes things, it’s like what I am doing with stereotypes. I kind of like it and it has stuck.” 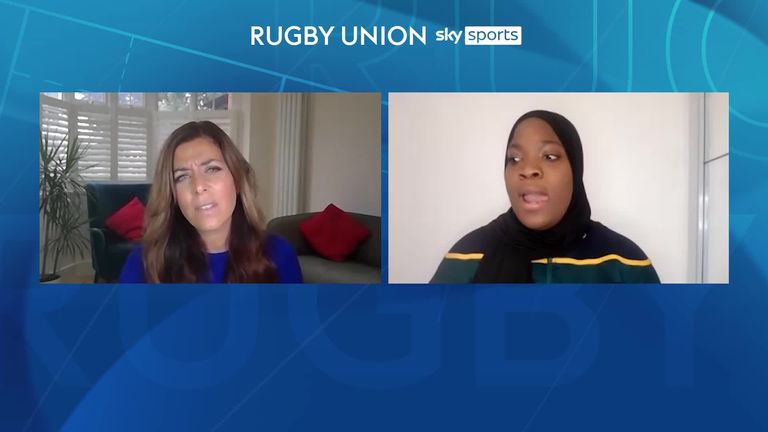 Zainab currently plays at Barnes Rugby Club, “they’re amazing and it’s weird even though Barnes is a very middle-class area and there are barely any black people at the club, I feel so at home. I guess because I’m an adult I know how to take control of my emotions and I can say no if I don’t want to be in an environment. We had another black woman join us recently because of me and that’s brilliant.”

Given that, perhaps things are beginning to change – “there is a slow progression,” she says. Her hero was World Cup winner Maggie Alphonsi and now she loves watching England’s Shaunagh Brown.

“There is more visibility and I like to be active on my social media, because I want people to know that yes if you’re black and a woman you can play rugby. I know how difficult it is so I want to be open with my journey so that other people like me coming through, or thinking maybe I want to try rugby, can look at me and say you know what I can do it.”

Zainab runs “Studs in the Mud ” where she uses rugby to try and change people’s lives for the better, shipping out kit around the world to give people, particularly women and children, the chance to play. She also has a project which aims to encourage more Muslim women to give rugby a go.

Wear the Red Rose 🌹🏉 (we both technically are hehe 👀) Massive thank you to @marlie_packer for showing her support for studs in the mud! A project launched earlier this year to help support grassroots rugby in Ghana whilst helping to change the lives of women and children for the better through the power of Rugby 🏉🇬🇭 Studs In The Mud are looking to host a women's 7s tournament next summer in Ghana and are raising funds . Please see LINK IN MY BIO to donate or visit @studs in the mud Facebook page to find out more ! Every little helps, Thank you 🙂 @worldrugby #rugby @womensrugbyhub @womensrugbyshow @rugbysaracens1 @englandrugby #studsinthemud #womensrugby #givingback #ghanarugby #Alhamdulillah #supportinggrassroots

“It’s about making a safe space. We are so underrepresented I thought I was the only one at one point so I’m trying to amplify our voices and create somewhere for them to play. We’re here for you to come and give you advice. I’m hoping that we can go and watch each other’s games, have little social things together and have a sense of belonging within the rugby community.”

Zainab goes on to talk about the one time she very nearly did turn her back on rugby. “I was ready to say you know what, I’m done, I can’t see myself in this space. It was quite emotional.

“I went on to the World Rugby guidelines and I wanted to see for myself if someone like me could play in a head scarf, a hijab. I was ready to leave but seeing that it was ok to play in one cemented it for me. There in black and white, it said I can practise my faith and play the game. I can be a Muslim rugby player.” 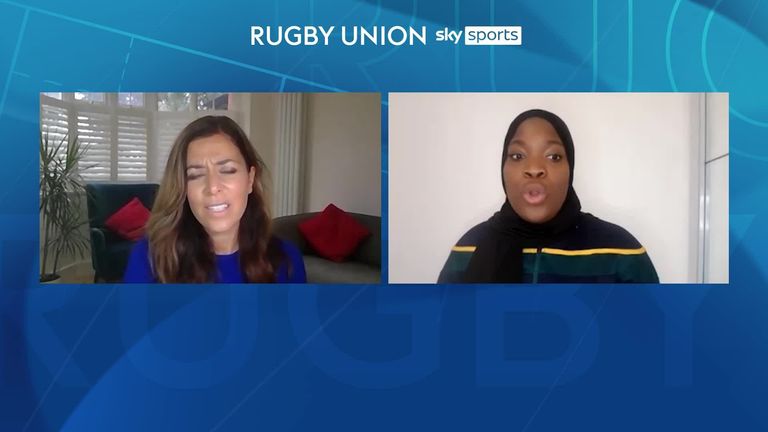 What does your dad think of rugby now?

“Oh he’s so proud. I was in The Telegraph a while back and he was straight off to the newsagents to buy a copy and get it framed to put it up on the wall and I thought, ‘hey are you the same person who was asking me why do I want to play rugby?’ He’s so super proud of me right now.”

“You have to see it to be it,” she concludes.

Zainab will carry on ‘bulldozing’ her way through the game, being different and standing out is no longer a negative for her. She’s using it to make rugby truly diverse. She’ll deserve that celebratory cup of tea if and when her rugby ambition is realised and there’s a Muslim woman wearing the red rose of England.