Wednesday looms as decision day for Socceroos coach Graham Arnold as he wrestles with a career dilemma which could have huge personal ramifications as well as a massive impact on the national teams.

It is understood that the Socceroo boss is fielding a lucrative offer from South Korean club FC Seoul, who want him to take over as their manager for the upcoming K-League season.

And they want to know whether he is going to take up the offer this week – perhaps as soon as Wednesday. 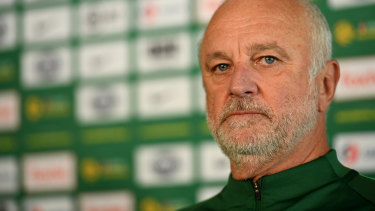 Arnold has been in charge of Australia's national men's team since succeeding temporary coach Bert Van Marwijk after the Dutchman shepherded the Socceroos through a fruitless World Cup in Russia two years ago.

When the ex-Sydney FC boss Arnold became Socceroos coach he also took on the role of Olyroos boss as he looked to gain a deeper influence on soccer development throughout the country.

But it is believed that the A-League title winning manager has become frustrated at the lack of international action and the ebbing away of resources as the cash-strapped game looks to tighten its belt and cut costs in the wake of the coronavirus pandemic.

His biggest issue is thought to be a reluctance to walk out on the Olyroos, whom he led through a tough Asian qualifying group to reach the Olympic Games football tournament.

That was postponed, along with the rest of the Olympics, earlier this year as COVID-19 laid waste to the sporting world but the tournament is due to be staged next year.

Arnold is a big believer in using under-23 teams as a launching pad for senior talent, and his attachment to this age cohort is reinforced by his belief that if they can play and do well in the Olympics (which the Australian men last qualified for in 2008, when he was also the Olyroos coach) then many will secure moves to stronger overseas leagues and go on to have important Socceroos careers.

It is not the fault of the FFA that the COVID-19 crisis has forced the cancellation of Australia's World Cup qualifiers and prevented Australia from taking on the best of Latin American opposition in the Copa America earlier this year.

But it is also understandable that the coaching staff, headed by Arnold, are increasingly frustrated at having to kick their heels: there is a mooted friendly with England in London later this year, but given the way the coronavirus is spreading again in Britain there is no guarantee that will go ahead either.

The chance to go and coach again in Asia will be tempting.

Arnold had one shot before, a short lived period in charge at Vegalta Sendai which lasted just six games some six years ago.

Since then he has landed A-League titles with Sydney and gained far more experience on the international stage.

FC Seoul were K-League champions as recently as 2016 but the capital city club struggled and battled against relegation from the top tier for much of last season.

Arnold has been contacted for comment but did not reply.

His agent, Tony Rallis, said: "There have been two offers that Graham has received but we are not in a position to comment on them now."