Since the start of the campaign, there has been a lot of talk about how a shortened pre-season may have negatively impacted the form and fitness of players in the top leagues in England.

Having found a way to seemingly use it to their advantage at Blackburn, Bradley Johnson has a different take.

“There was obviously less recovery time,” the Blackburn midfielder told Sky Sports after winning Sky Bet Championship Player of the Month for September. “We only had two weeks off and it’s not what we were used to. But because of that when we came back for pre-season we were in good shape anyway.

“Whereas before you would use the first two weeks of pre-season getting your fitness and base level back, we didn’t need to. And that gave us time to work on our new shape and system, and it was good for us. We also had a game within the first week, which is very rare.

“As well as working on our new shape we also changed the way we trained, and everyone has bought into it. We’ve got a great bunch at this club and we’re all working hard for each other on the pitch and away from it.

“All the hard work that was put in during lockdown and pre-season is paying off, not just for me but the whole team.” 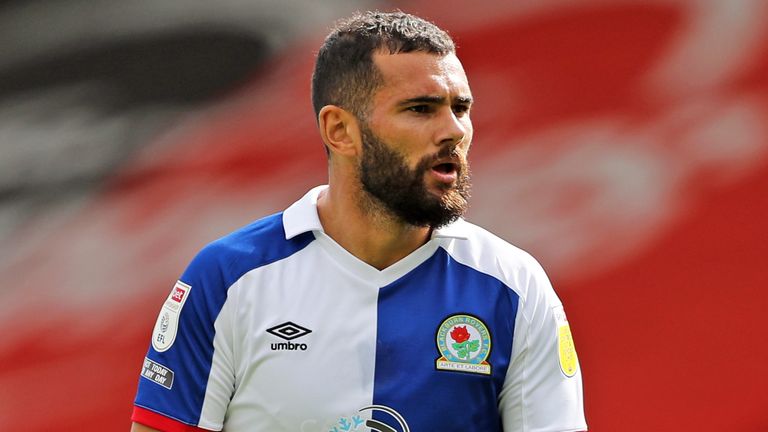 Johnson joined Blackburn in the summer of 2019 after leaving Derby and scored three times in 34 appearances last season. A tally he managed to equal in his first three appearances of this campaign.

Now 33, the midfielder is essential to Tony Mowbray’s new-look 4-3-3 system, using his trademark running power and box-to-box prowess to help keep the system fluid and energetic.

“It’s a role I’ve played before and I’m used to it,” he said. “I played in a 4-3-3 under Frank Lampard at Derby and many fans would say it was the best I played for the club.

“I’m a proven goalscoring midfielder and I like to chip in, but I know I have to pick and choose because I am the ‘No 6’ who sits the deepest. But I love getting stuck in. I’m a box-to-box midfielder and that’s the way the boss wants me to play. He doesn’t want me to just sit, he wants me on the front foot, nicking the ball high up the pitch and organising everyone around me.

“The way we’ve played this season is very intense, and I’m sure a lot of our opponents will say that. We win it high and punish teams. I’m able to get onto the edge of the box and get a few shots away, and it’s got me a few goals so far.”

The training programmes made necessary by lockdown seem to have paid off. It has been more than 10 years since Johnson made his Championship debut, but he is still playing with the energy and verve of a midfielder enjoying his breakthrough campaign. At Leeds, Norwich – where he has also spent three seasons in the Premier League – Derby and Blackburn he has seen the second tier develop beyond recognition since 2010. And he has adapted with it to stay competitive.

“The role of the midfielder has changed in general,” he said. “When I first started out plenty of teams were still just sitting deep and launching it quickly up the pitch to get it to the forwards to try and score.

“But it hasn’t got any easier. Every year it gets harder and the quality of the players gets better. A lot of teams lately have gone up from the Championship and done really well, which shows the level of this league. When I was playing in the Premier League it was much more split.

And with all the experience he has, there is an abundance of knowledge that he can offer the younger players in Blackburn’s squad in how to have a long and successful career.

Five of the 11 players to start their last game before the international break against Cardiff were under the age of 25. It’s a role he’s more than comfortable with. “Even when I was younger I was vocal and wanted to have my say, and I feel I’ve always been respected enough that the people around me listen to me,” he said.

“Now I’m one of the older guys and we have a young, hungry squad. I remember when I was younger I’d always listen to the older pros and see what they had to say. But I don’t see it as a responsibility.

“I’m not a big shouter, I think those types of older players have gone out of the game. For me it’s the way I train, and do the right things. Actions can speak louder than words and I hope the younger lads can learn from that.”

It has been a solid start to the season for Blackburn. They have picked up seven points from four games thus far, and have shown enough to suggest they can be real contenders for the top six.

They briefly flirted with making the play-offs last season before falling away. With a seemingly wide open league, Johnson hopes they can make the leap.

“We know we shot ourselves in the foot last year,” he said. “We had chances for the top six and just fell short.

“But we spoke about that and we learned from it. It’s still early doors but we’ve set standards and we want to keep them up. If we play how we want consistently then we will get to where we want to be.”

But to help them do that Johnson wants what everyone else connected with the game in this country does: The fans back at Ewood Park and beyond.

“I can only speak for myself but I play off of adrenaline and I need the fans behind us,” he said. “It affects performances and home and away games just don’t have the same feel.

“It’s not quite like playing a training game as we still know what’s at stake, but it does feel weird. Sort of like an old-school 11vs11. We’re getting used to it, but it’s not something we want to have to get used to.

“We thought they would be back by October, but they’re not. It is getting agitating because we want them back, and we know they want to be back.”