Everything was going to plan for Darren Ferguson and Peterborough last season.

From mid-October they almost exclusively occupied a top six berth in Sky Bet League One and, after a considerably rough festive period, had got back on track towards the end of January, when they began a near-faultless streak of six straight wins.

With 68 goals scored, they boasted the division’s most deadly frontline and in Ivan Toney they had a marksman who would give any defender nightmares. The chance of a return to the second tier for the first time since 2012/13 was picking up traction.

A 2-0 win over fellow promotion-chasing side Portsmouth on March 7 moved Ferguson’s side into the play-off places when professional football was suspended, with chairman Darragh MacAnthony a vocal advocate of continuing the season when safe to do so. 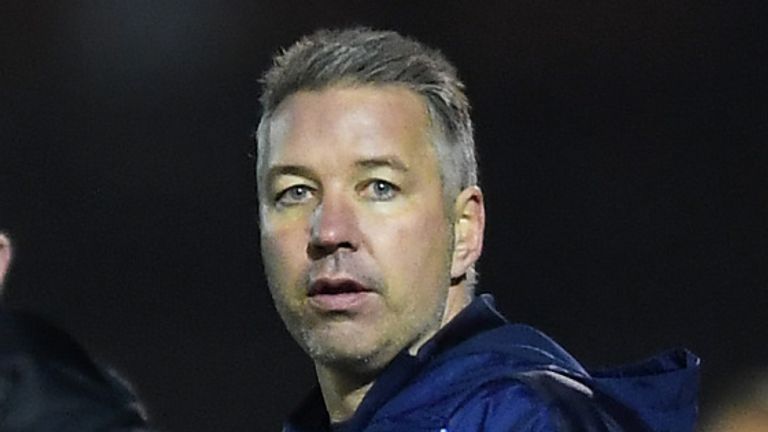 Yet on June 9, 18 clubs voted to curtail the season, with the final table subsequently decided on an unweighted points-per-game basis. Peterborough’s hopes were dashed in an instant, as they were leapfrogged by eventual play-off final winners Wycombe.

It only illustrates Ferguson’s maturity and winning mentality that not even a smidgen of bitterness remains. Putting right any wrongs and ensuring his side are in a significantly healthier position to challenge is the clear priority.

“We all felt very confident we’d end up in the top two,” he tells Sky Sports. “We’d beaten the teams around us comfortably. We’d beaten Wycombe 4-0, we’d beaten Rotherham, we’d beaten Oxford 4-0. To do that at that stage of the season filled us with a lot of confidence and belief.

“I think we’ve just carried that on this season. We’ve learned to cope with certain set-backs and we’ll need to do that again. I think the recruitment was important because, of the 10 players that played against Portsmouth, 10 of them are still playing in the team at the moment, the only change is Jonson Clarke-Harris for Toney.

“They are enjoying their football and, even with the ones who haven’t been playing, there’s a real togetherness among them and a real good team spirit. Winning games brings confidence, belief and makes this easier. The players are fully aware it’s just the start and what I’ve been really impressed with is, even when we went to Oxford in the FA Cup and I made some changes, we had that mentality of just winning the game.”

With the way things are going on the pitch, it’s easy to see how a sense of unity is building in Cambridgeshire. Ahead of Saturday’s trip to Gresty Road to face Crewe, Peterborough sit three points clear of second-placed Ipswich and are on an eight-game unbeaten run in the league.

Between October 3 and November 10 – a 39-day period – Ferguson’s men played 11 games in all competitions and didn’t lose a single one. Organisation, he says, is key to navigating this unique, truncated campaign.

“It’s a big challenge. We have to be prepared and organised. We had a meeting before the big run of games in October and between myself and my staff, we’ve managed it well. The medical staff and sports science have to manage the players between games. We didn’t know at the start of October that we’d go on such a run, which has meant most of the players have played regularly.

“We’ve done it very well and we’ve now got another busy schedule coming up – we’ve got nine games in 28 days, which is incredible. We’ve got one league game every four days. I’m looking for little triggers that players are fatigued, looking at the data. It’s all got to be done, even more carefully now.

“This is a one-off season, I hope, and we have to keep reminding players to stick to the protocols. They are excellent at the training ground but we have to remind them not to go to other houses and seeing family members. It’s just a different world and we have to be super careful.

“We used the Oxford game and the game in midweek [EFL Trophy fixture against Cambridge] as a rest for some of the players but the worry there is that you’ve broken that cycle and there might be a bit of rustiness during the first game back.

“Not that I think there will be but I have to do it. I’ve got no choice because there’s no way I can ask them to play another nine games in 28 days. It’s impossible. I have to use the whole squad, which is why we recruited the squad we have. My job over the last few weeks has been managing the players who haven’t been playing. I have to make sure I keep them going. There are challenges to any season, but particularly this one.”

With the trajectory the club is on, there was no surprise when Peterborough co-owner Dr Jason Neale recently stated that Ferguson has “one of the safest jobs” in the cut-throat industry that is football management. In January, the 48-year-old will reach the second anniversary of his third spell in charge at the Weston Homes Stadium.

It’s a compliment of the highest order, but one Ferguson isn’t getting too carried away with. It’s all about striking a balance.

“If we lose five games on the bounce, we’ll see if they say it then!” he quips. “I’ve been in the game long enough to know there are ups and downs and you have to not get too excited when you are winning games and don’t get too down when you are losing them.

“Every season you have a run of games where things don’t go great. I have a great relationship with the owners; I’ve got a fantastic relationship with Darragh and we’ve known each other for 14 years now. I have to say the club is in a really healthy position. We’re going to be going into a new stadium and the training ground is constantly getting improved, but we need to get in that Championship to really cap everything.”

Last season, Ferguson told Sky Sports how he “hadn’t managed in the Championship for long enough”. If Posh continue to build momentum at the rate they are currently, inside the next six months, he could be set for a return.