Germany were held in a 3-3 thriller with Turkey, France hit seven and Italy hit six, while Portugal and Spain played out a goalless draw on Wednesday.

Olivier Giroud became France’s second top scorer when he netted a double to take his international tally to 42 goals as the world champions crushed an injury and COVID-19-ravaged Ukraine 7-1 in a friendly in a near-empty Stade de France.

Giroud, who celebrated winning his 100th cap, found the back of the net twice in the second half to move within nine goals of Thierry Henry’s French scoring record.

The Chelsea striker leapfrogged Michel Platini, who scored 41 goals from 72 games between 1976-87.

The other goals came from the 17-year-old Eduardo Camavinga, who became the youngest France scorer since 1914, an own goal by Vitaliy Mykolenko, Corentin Tolisso, Kylian Mbappe and Antoine Griezmann, while Ukraine reduced the arrears through Viktor Tsygankov.

Camavinga put France ahead on nine minutes with a clever overhead kick after Giroud’s header had been parried by Heorhiy Bushchan. Bushchan was the only active ‘keeper on the Ukraine team sheet, although assistant coach Oleksandr Shovkovsky, retired since 2016, was included in the squad to make up for the absence of their other two ‘keepers who had tested positive for COVID-19.

At the other end of the age spectrum, Giroud, 34, doubled France’s tally with a splendid 20-metre curled shot into the top corner in the 24th minute and he added the third nine minutes later with a header before Mykolenko headed a Houssem Aouar cross into his own net six minutes before the break.

Ukraine coach Andriy Shevchenko had to improvise with six injuries and eight COVID-19 cases in his expected squad, but the visitors managed to pull one back in the 52nd minute thanks to a long-range strike from Tsygankov.

Tolisso added a fifth for Les Bleus in the 65th with a curled shot and Mbappe scored the sixth at the end of a dazzling run eight minutes from full-time. Griezmann, who like Mbappe came on as a second-half substitute, fired home in the 89th to complete the rout.

France face Portugal next in a Nations League Group 3 clash on Sunday as Ukraine take on Germany in a Group 4 game.

Germany midfielder Florian Neuhaus scored on his national team debut but Turkey came back three times to earn a 3-3 draw in their friendly.

Kenan Karaman slotted in a stoppage-time equaliser after Luca Waldschmidt fired in an 81st-minute volley that had put Germany 3-2 ahead.

Turkey twice before had levelled, with both teams missing several regular players. 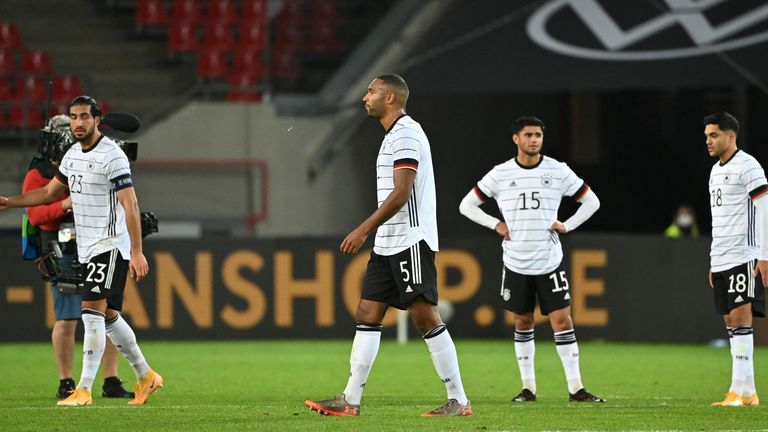 Julian Draxler’s good finish from a Kai Havertz assist had put the hosts ahead on the stroke of half-time in front of 300 fans allowed in the stadium but the Turks equalised with Ozan Tufan’s curled effort five minutes after the restart.

The 23-year-old Neuhaus completed a lightning quick one-two with Havertz to put Germany back ahead in the 58th.

But he then lost possession to Efecan Karaca who fired in from close range in the 67th for Turkey to draw level once more before the late goals from Waldschmidt and Karaman.

The Germans, playing without Bayern Munich and RB Leipzig players who were rested and missing several more through illness and injury, face Ukraine on Saturday and Switzerland three days later in the Nations League.

Turkey play Russia on Sunday and Serbia next Wednesday in their Nations League matches.

Portugal had to settle for a 0-0 draw at home to Spain in a blockbuster international friendly after hammering the crossbar twice and missing a last-gasp open goal.

Cristiano Ronaldo, who hit a hat-trick when the two sides met in a thrilling 2018 World Cup group stage game, almost gave the European champions the lead when he sent a shot crashing against the underside of the bar early in the second half. 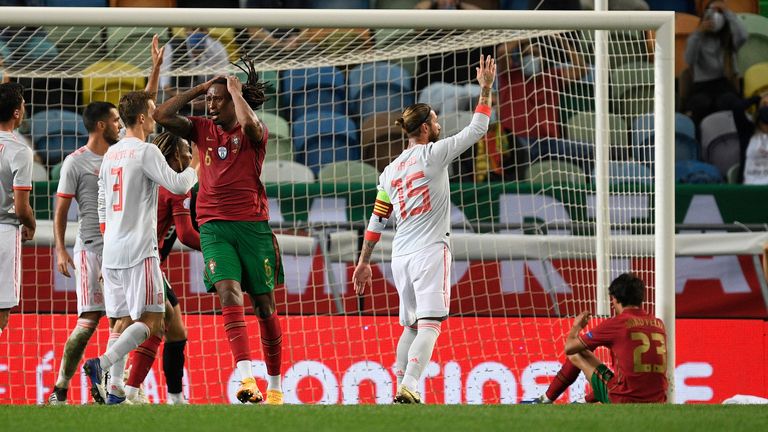 He also hit the bottom of the bar before running away to celebrate, only to see the ball bounce on the goalline without crossing it.

Portugal’s most glaring chance was still to come though, when Ruben Semedo headed a corner to the far post towards Joao Felix, who got the weakest of touches and somehow missed the target with the goal gaping in front of him.

Forward Francesco Caputo scored on his Italy debut at the age of 33 as they routed Moldova 6-0 in a one-sided friendly.

Stephan El Shaarawy scored twice, while Bryan Cristante and Domenico Berardi, with their first Italy goals, were also on target and Veaceslav Posmac put through his own goal to complete a dreadful night for the visitors.

Italy fielded an experimental line-up, with Caputo becoming their second oldest-ever debutant, but Roberto Mancini’s side were still far too good for the visitors as they extended their unbeaten run to 17 games. 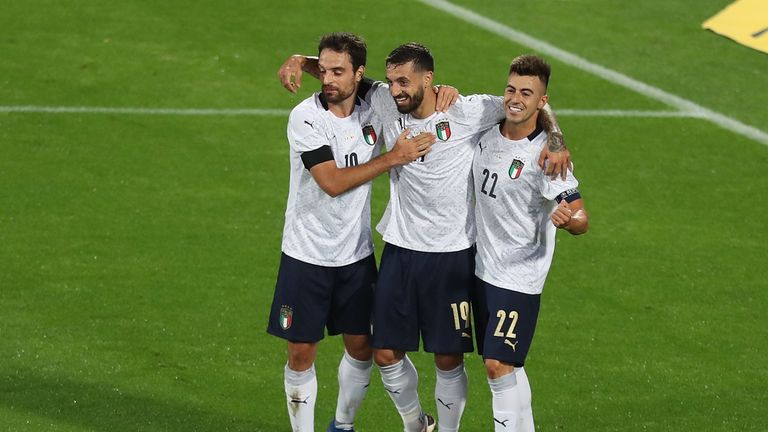 Cristante opened the scoring with an easy near-post header in the 18th minute and Caputo, who has spent much of his career in the lower divisions of Italian football, ran onto Cristiano Biraghi’s incisive pass and scored with a clinical finish five minutes later.

Chinese-based El Shaarawy showed superb control as he collected Cristante’s looping pass, beat his marker and flicked the ball into the far corner on the half hour for the third.

Moldova provided the fourth as Posmac, in trying to clear the ball for a corner, instead fired into the roof of the net and El Shaarawy added a fifth on the stroke of half-time, the first time since 1987 that Italy have scored five in a first half.

The visiting defence was better organised after the break but could not stop Berardi scoring at the far post in the 72nd minute.

Mexico handed new Netherlands coach Frank de Boer a defeat in his first game in charge as they enjoyed a deserved 1-0 win over their hosts in a friendly.

Raul Jimenez made up for several missed first-half chances by tucking away a penalty on the hour mark after Nathan Ake had pulled him back in the area.

It was as much as an enterprising Mexican side deserved as they set up numerous chances in contrast to a pedestrian display from the Dutch. 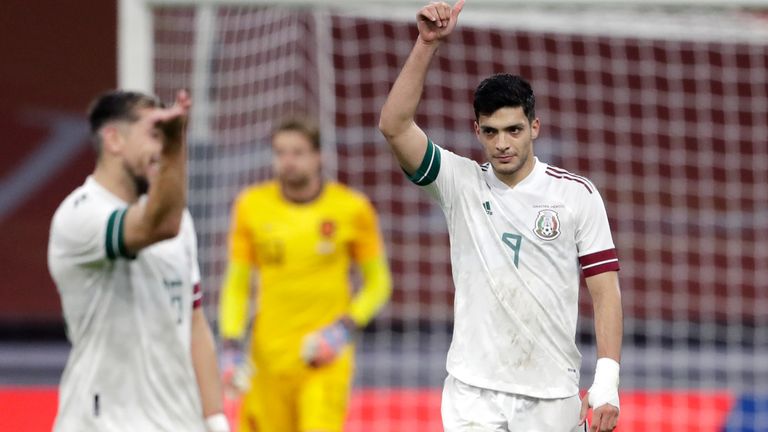 Jimenez and Jesus Corona spurned opportunities before the break while the only shot from the home team came when Memphis Depay put Ryan Babel in on goal but he hacked his shot wide.

Goalkeeper Tim Krul, playing his first international in five years, made a key stop in the 55th minute to deny Corona from close range but even with his past record in saving penalties for the Netherlands had no chance saving Jimenez’s spot-kick.

The goal seemed to momentarily wake up the Dutch team but it was Corona who came closest to adding to Mexico’s lead with a shot after a mazy run in the 75th minute that Krul again did well to stop.

Luuk de Jong and Depay missed out on a last-gasp chance for an equaliser with De Jong’s initial header saved and Depay’s follow-up crashing back into play off the crossbar.

Adrian Grbic and Christoph Baumgartner hit the net as Austria turned the tide to beat Greece 2-1.

Mario Pasalic and Josip Brekalo sealed a 2-1 win for Croatia in Switzerland, after Mario Gavranovic had put the hosts ahead.

Tomas Holes and Vladimir Darida helped the Czech Republic to a 2-1 win in Cyprus, with Loizos Loizou scoring for the hosts.