Footballer-turned-rapper Joey Champness has denied suggestions he illegally walked out on the Newcastle Jets amid an ugly tug-of-war between two A-League clubs who are fighting to sign him for his comeback season.

Champness hit pause on his career with the Jets last August to move to Los Angeles and pursue his ambitions of becoming a recording artist under his stage name, JOWIC. 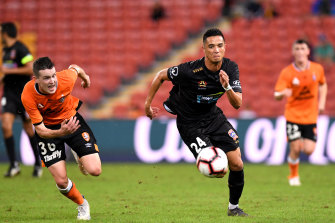 Joey Champness is ready to return to the A-League – the only question is with which club.Credit:Getty

The 23-year-old released a single, ‘My Plan’, and put together a music video which attracted well over 1 million views – but Champness fled the US after the pandemic hit and is back in Australia, and ready to return to football while still juggling his musical commitments after reaching an agreement with Brisbane Roar.

But the Jets have kicked up a stink, claiming the winger signed a three-year contract extension with the club before his departure that was specifically designed so that if Champness did come back to the A-League, it would be with them and no-one else.

Professional Footballers Australia is now involved as a mediator and is set to wade through the various claims and counter-claims made from both sides to determine where Champness will be playing this season. 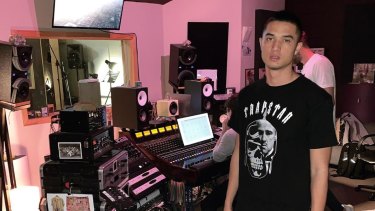 However, Champness told Herald his contract stipulated that if he did not return to football before the end of May, he would be released from his ties to Newcastle, but the club would still have first right of refusal on his services.

He said he gave the Jets every chance to sign him and informed McKinna personally last month when he made the call to resume his A-League career and to let him know Brisbane had made an offer.

Champness said the cash-strapped Jets, who are desperately seeking a new owner due to a lack of investment from chairman Martin Lee, had weeks to put forward a counter-offer but did not do so.

"Yesterday, someone from the Jets has decided that making me a “villain” would best suit their personal image and help save face. It’s unfortunate that I am being portrayed this way by an organisation I have the utmost respect for," Champness said.

"I have a lot of respect for Jets supporters. For that reason I want people to know the truth … I played with heart and will continue to do so always. I am excited to get back on the pitch and move forward in my career."

Neither the pandemic nor the absence of a current collective bargaining agreement for the A-League have had any impact on Champness' status, sources said.

Champness – who was a Roar youth player prior to moving to the Jets – was regarded as one of the best young talents in the A-League before his hip-hop sabbatical and was an important part of Olyroos coach Graham Arnold’s plans for Tokyo 2020.

Australia's qualification for the Games, coupled with their COVID-enforced postponement until next year, could mean that Champness is able to feature at the Olympics after all.