Kevin De Bruyne is unmoved by rumours Lionel Messi could leave Barcelona and join him at Manchester City.

City have been linked with a move to sign Messi with chief operating officer Omar Berrada saying the club will be ready to pounce should the Argentine allow his contract with Barcelona to expire next summer.

City appear to be the obvious choice for Messi given that former Barca boss Pep Guardiola is their manager, but the Belgium midfielder has played down speculation surrounding a possible move.

Asked about Messi ahead of Belgium’s game against England on Sunday, live on Sky Sports, De Bruyne said: “I don’t really care to be honest.

“If he comes, it’s a good thing, if he doesn’t there is enough good players at the club who I enjoy playing with, so that is not for now,” he said. De Bruyne also revealed he is open to signing a new contract at City but said talks have yet to get started.

The Belgium international, who will be in the side to play England at Wembley, has been a key part of City’s success over the last few years and has won a host of club honours and individual awards.

He has two and a half years to run on his current deal and reports suggest he is poised to extend that.

De Bruyne said: “I am very happy at the club, I can say now I have not spoken once to the club so I don’t know why people are saying I have already agreed to something.

“I always told everybody I am really happy at the club and I feel comfortable so if the people at the club want to talk to me I am open to that and we will see what happens.

“But at the moment nothing has happened so I just get on with the way it goes.”

Suarez: Messi could be convinced to stay at Barca

Atletico Madrid striker Luis Suarez believes Messi, his former Barcelona team-mate, could be tempted to remain at Barca beyond this season if there is a change at the club at board level.

Suarez only left Barcelona last month but said he was left in tears because of the treatment he received from the club after he was told his services were no longer required. 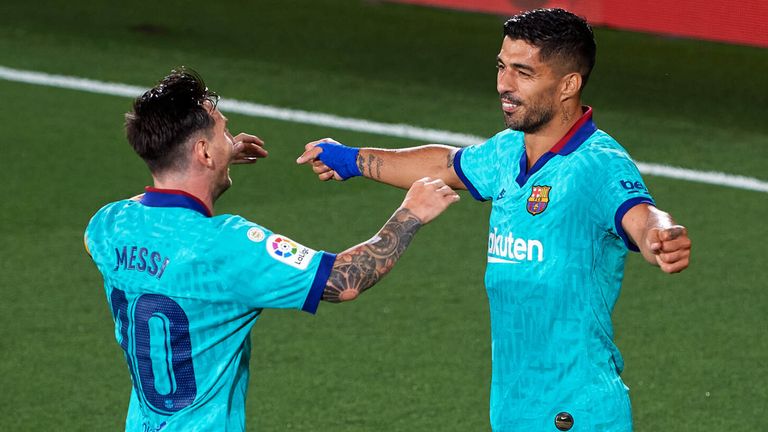 Messi, too, has been critical of the running of the club, calling out president Josep Maria Bartomeu for criticism this summer after he was forced to stay at the club.

But the former Liverpool striker is optimistic that Messi, who can start negotiating with other clubs from January, could have a future in Catalunya beyond this season, provided Bartomeu is removed.

“Maybe there’s the possibility of him playing for another club, but if he feels comfortable and happy, and a new board come in, he will want to stay at the club,” Atletico Madrid striker Suarez told ESPN television’s 90 Minutes.

“As a friend I will be happy if things go well for him (at Barca), but also if he goes to another club.”

Bartomeu has called club elections for March 2021 but could be forced out sooner, with a no confidence vote set to be launched against him and the board.