Liverpool’s injury crisis has continued after the club confirmed that Trent Alexander-Arnold will be out of action for four weeks after being forced off in the 1-1 draw against Manchester City on Sunday. The Reds have been hampered with a number of injury issues since the start of the season.

Joel Matip has been carrying a knock for several weeks, but he made his return at the weekend.

Virgil van Dijk is expected to miss the remainder of the season after undergoing surgery on his anterior cruciate ligament.

Alex Oxlade-Chamberlain also remains out with no timeframe set on when he’s expected to return.

Fabinho was filling in at centre-back before Matip’s return, but he too picked up an injury last month. 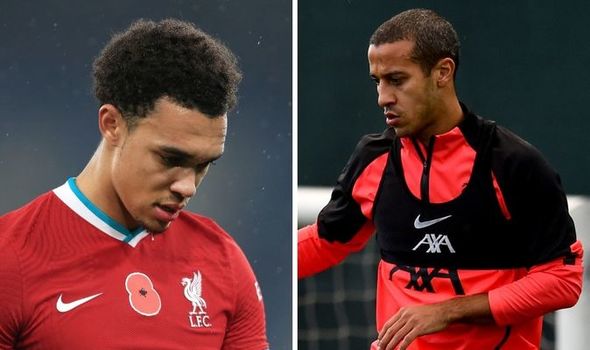 And Klopp was left with his head in his hands after seeing Alexander-Arnold forced off against City with a calf issue.

The Liverpool full-back underwent a scan on Monday where it was confirmed he would be out of action for at least four weeks.

It means he will likely miss Liverpool’s next six games, including Champions League fixtures against Atalanta and Ajax.

But there is some good news for Klopp on the progress of Thiago Alcantara’s recovery.

The Spaniard has played just two games for Liverpool since joining from Bayern Munich in the summer.

His last appearance came in the Merseyside derby after which he complained of discomfort following a late challenge from Richarlison.

And the Daily Mail report that Thiago is still receiving treatment on the injury.

However, the report adds that Liverpool are hopeful that he’ll be ready to return after the international break.

There were some suggestions that Thiago could have been ready to play against City at the weekend. 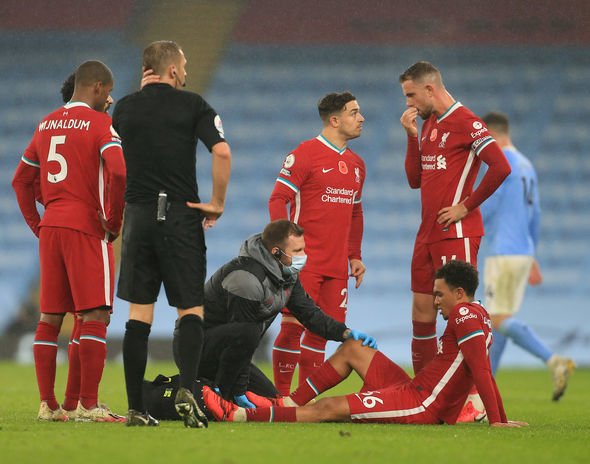 But Klopp indicated in his pre-match press conference that he wasn’t going to take any chances on the 29-year-old.

“There can be big improvements from one day to the other, and all these kinds of things,” he said.

“But in the end, when a boy has no problems anymore, then he has to train.

“The longer he’s out the longer he has to train until we consider him again as a starting lineup player.

“That’s obviously not the case with Thiago, and that means he will not be available for Sunday. That’s it.”