Ian Baraclough has denied Northern Ireland’s defeat to Slovakia represents the end of an era as his side’s hopes of reaching Euro 2020 were cruelly ended.

Northern Ireland suffered a 2-1 play-off final defeat at Windsor Park, with Slovakia’s Michal Duris striking in the 110th minute of the game after an 88th-minute own goal gave the home side hope and forced the match into extra-time.

Baraclough’s team began the night as favourites as they looked to secure qualification to a second consecutive European Championship, but the heroics of the famous win over Greece five years ago could not be repeated.

There has already been significant turnover in the squad since Euro 2016 as the likes of Gareth McAuley, Chris Brunt and Aaron Hughes have all moved on, and there will now be speculation over the next move for a number of senior players, not least 35-year-old skipper Steven Davis.

But Baraclough said it was too soon to talk about the futures of any of his players.

“There’s not an end of an era feel,” he said. “I’ve told the players they can all go again. It’s not a case of writing anyone off. That’s for you guys to speculate, but you’ll not get that feel from me.” 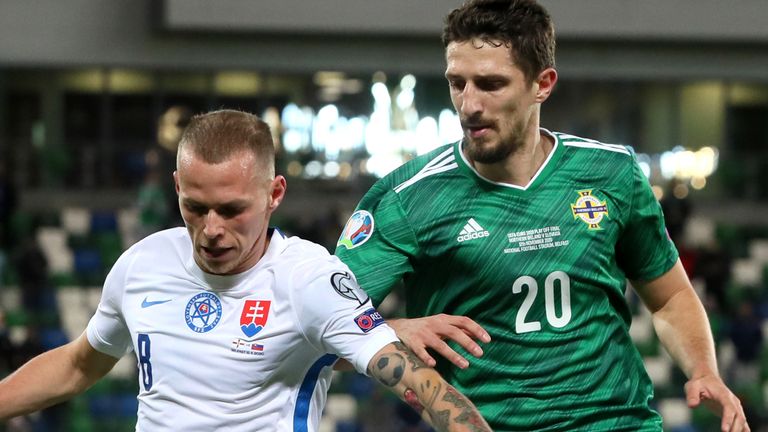 Northern Ireland have little time to pick themselves up, with their next fixture away to Austria on Sunday in the Nations League.

Baraclough’s options could be depleted for the match. Aside from those that completed 120 minutes at Windsor Park, Stuart Dallas played on with an elbow injury while Craig Cathcart and Paddy McNair hobbled off in extra-time.

“There might be five or six from this game that don’t even make the trip,” Baraclough said. “That’s to look at (on Friday). That’s the nature of these tripleheaders that the squad has to be used to the maximum.

“Now we’ve got to be ready to give a big effort again in three days’ time.