Report and highlights from the Sky Bet Championship clash at Hillsborough

Ivan Toney scored twice as Brentford recorded their first Championship away victory of the season, winning 2-1 at Sheffield Wednesday.

Jack Marriott made his full debut for Wednesday after signing on loan from Derby County last week.

Marriott put a low shot on target early on which was comfortably saved by David Raya. 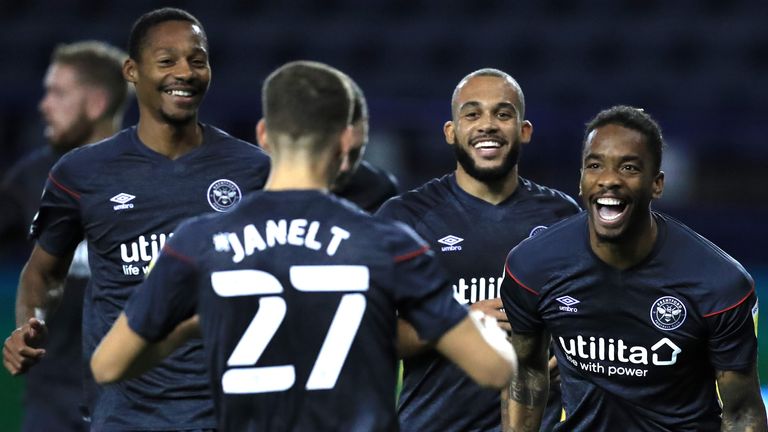 Brentford took a seventh-minute lead when Henrik Dalsgaard’s low drive was parried by Cameron Dawson and Toney was the first to react, seizing on the loose ball and firing into the net.

Toney threatened again at the end of a good move, hitting the side netting after being forced wide.

Raya made a good save to keep out a well-struck shot from Adam Reach, who had made a strong run into the area.

Brentford’s Bryan Mbeumo also went close with an effort from inside the area, cutting inside before firing in a curling effort which just cleared the bar.

The hosts equalised when Barry Bannan found Kadeem Harris on the right and his cross was met by a stooping header from Callum Paterson after 25 minutes.

Brentford regained the lead when Toney scored his second goal of the night six minutes later, meeting Janelt’s corner with a near-post header.

A good build-up in the latter stages of the half led to Mathias Jensen finding himself through on goal with Dawson coming to his side’s rescue with an important block.

Dalsgaard also posed a threat with a rasping drive which was only just off target.

Wednesday boss Garry Monk made a change for the start of the second half with Joey Pelupessy replacing Alex Hunt.

There was a second change for the home side soon after the re-start when Josh Windass appeared to pick up a knock and made way for Fisayo Dele-Bashiru.

Brentford lost skipper Pontus Jansson, who looked to have suffered a hamstring injury, with Mads Bech Sorensen taking his place.

Toney spurned a chance to complete his hat-trick, scuffing a shot wide after connecting with Sergi Canos’ low cross.

Wednesday made a change in attack with Jordan Rhodes taking over from Marriott.

Josh Dasilva then went close for Brentford with a curling effort from inside the area.

Wednesday never threatened to draw level in a second half which failed to match the quality of the first as they went down to their first home defeat of the season.