The Socceroos will finally finish their second stage of World Cup qualifiers by June of next year, the Asian Football Confederation has confirmed.

The COVID-19 pandemic has created chaos for the qualifying tournament for Qatar 2022, but Asian officials have now pencilled in dates in March and June 2021 for countries to complete their second round groups.

That means the Socceroos will face Kuwait at home and Nepal away in March of next year, finishing up with two home fixtures in June 2021 against Chinese Taipei and Jordan. 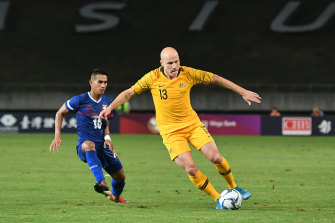 Graham Arnold's side is in a strong position in Group B of Asian second stage qualifying as they have a 100 per cent record, having won all four games to give them 12 points. The Socceroos are two points clear of Kuwait and Jordan, both of whom have played five games.

Australia, with three of the last four at home, are well placed – as widely expected – to progress to the final stage of Asian qualifying given they have scored 16 goals and conceded only one so far.

The third stage of qualifying, which will be much tougher, is expected to begin in September 2021 and finish by March 2022.

If Australia finishes third in the third stage group – as they did in 2017 – they will need to win an Asian play off before progressing to an intercontinental play off.

Last time they defeated Syria before beating Honduras to qualify for Russia 2018.

The AFC has ruled that the Asian play off next time will be a single "winner takes all" match, with the victor progressing to the intercontinental play off.

Those games are scheduled for a FIFA window in May-June 2022.