Liverpool star Virgil van Dijk snubbed Everton goalkeeper Jordan Pickford after his injury, reports say. The Netherlands international was fouled by the England shot-stopper in Saturday’s 2-2 draw and could now be sidelined for months. And he was far from impressed with Pickford when the Everton star tried to help him to his feet.

Liverpool could only manage a draw against Everton in Saturday’s blockbuster showdown.

The Reds took the lead twice through Sadio Mane and Mohamed Salah respectively, but were pegged back by Michael Keane and Dominic Calvert-Lewin.

The biggest talking point from the showdown, however, was Pickford’s tackle on Van Dijk.

The Everton star slid through his man, getting none of the ball, and it’s since been suggested Van Dijk could miss the next seven to eight months through injury.

And the Liverpool Echo say that, after the incident, Pickford was snubbed when he tried to help the 29-year-old to his feet.

It’s claimed that Van Dijk was overheard saying ‘no’ to the Toffees goalkeeper as he attempted to lend a hand. 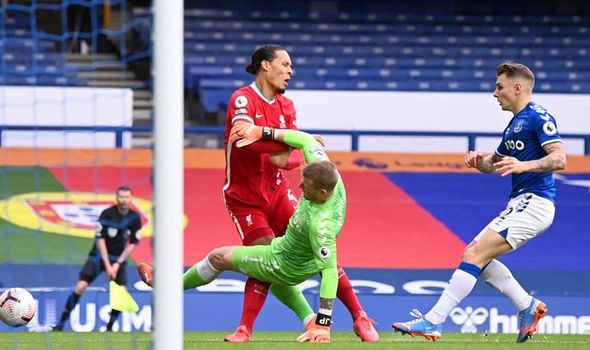 And Van Dijk, though he tried to carry on, was eventually forced to make way for Joe Gomez against his will.

Liverpool star Jordan Henderson claimed Pickford had apologised after the match, saying: “Everyone keeps asking us about it so I’m guessing it’s a red card. It mustn’t be a good challenge.

“To be fair, Jordan came up and apologised to me after the game and [told me] to tell Virgil.

“It mustn’t be great. But yeah, not just that incident, we created so many good chances to score and overall we should’ve won the game.”

Henderson had a late goal chalked off for offside, with Mane adjudged to be standing in an offside position.

And he said of that decision: “It does feel [pretty cruel]. 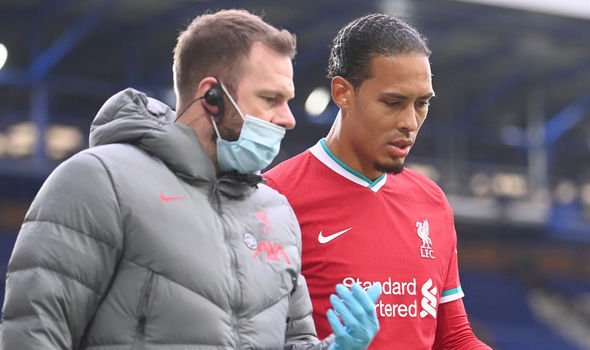 “You know better than me with the offside, but it must be [cruel] with VAR, that everyone wants. Yeah, disappointed that we haven’t got the win.

“I thought the performance was very good and we deserved to win the game.

“They bend the lines sometimes don’t they to make it offside? I’m not sure how they did it, yeah I’ve seen it before but not just that goal, our overall performance, the chances we created, we deserved to win, I thought from start to finish we were the better team. Everton will be the happier with the draw.”

Henderson was pleased with Liverpool bouncing back from their 7-2 defeat to Aston Villa before the recent international break.

“I had full confidence we would react in the right way and today we reacted very well. We knew it would be an intense game, Everton are doing so well at the moment,” he said.

“We knew it would be a good game, intense but I thought we did enough to win the game. But there’s still positives going into the next game.

“The result at [Aston] Villa woke us up a bit certainly, it was a bad game overall, we all know that.

“After that it’s about the reaction and I thought the boys reacted really well. That’s all you can ask, to give everything, especially in a derby.

“Playing the way we did, some of the football, the chances we created, we defended well with intensity.

“Very happy with the performance. Disappointed we didn’t get the three points but we move on and go again.

“We’ll not look forward too far, we always concentrate on what’s important and that’s the next game.”