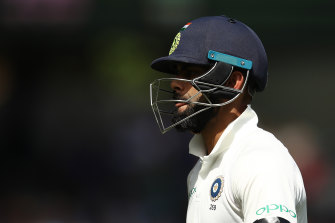 A dejected Virat Kohli after being dismissed by Josh Hazlewood in Sydney in January 2019.Credit:Getty

Josh Hazlewood would like to take the bat away from Virat Kohli. James Anderson hunted his outside edge in 2014. Early this year, the Kiwis attacked his pads and stumps.

The two legal strategies worked with devastating effect. The greats, however, live and learn. Kohli rarely has two bad series in a row.

In fact, his best, in Australia in 2014/15, came months after his worst. By changing his guard from leg to middle stump and batting out of his crease, he was able to avoid giving catching practice to Australia's cordon as he had in England.

Doubtless, the flatter tracks and more batsman-friendly atmospherics in Australia helped but Kohli's record suggests you cannot fight a new battle with the same tactics and expect to win.

Leg-spin is seen as the silver bullet to Kohli, especially at the start of his innings in the shorter forms, but should it be? Or is it a theory built on Adam Zampa's success to him?

When Tom Moody was at the helm of Sunrisers Hyderabad, his team would turn to Afghanistan's leg-spin wizard Rashid Khan, whose IPL record against Kohli, according to Cricinfo, is 18 runs from 19 balls for one dismissal, which any captain would take.

But, as Moody notes wryly, "everyone has a weakness against Rashid Khan". That said, teams are persevering with the strategy, including Australia.

Kohli admires Zampa's audacity to keep attacking under fire – for good reason. Only three men have dismissed him more at international level.

"That might be an option for us – Zamps, who has done well against him white-ball cricket," Hazlewood says. "I reckon he'll get first crack most of the time."

One Australian cricketing identity wants to see Zampa target the stumps while leaving square leg open as Kohli is not a major sweeper. To score, the insider says, Kohli will then need to use his feet. The wider delivery then becomes more dangerous to Kohli – who prefers to advance middle stump to middle stump, unlike New Zealand's Kane Williamson, who moves in a direct line to the release point – as he has to play further away from his body. The stumping also comes into play. 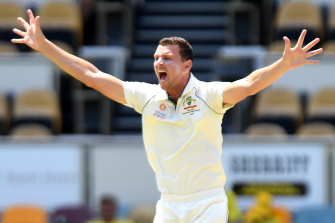 This approach appears best suited for the day/night Test in Adelaide due to the need for more grass coverage to preserve the pink ball.

"If there's a bit in the wicket you can go a bit straighter, attack the stumps and get those lb's and bowleds if it's nipping around on the wicket," Hazlewood says. "The flatter the wicket, again you could bowl straight with straight fields or go away from the stumps with an off-side field."

Hazlewood, however, says with the white ball he prefers this method than the fourth or fifth stump line.

"It's a bit easier in Test cricket but you're taking out a lot of modes of dismissals," Hazlewood says.

"You're taking the stumps out of play. That's playing the long game, I think. I'm not sure that's the best way to go." 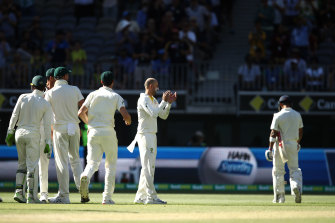 Can you prey on Kohli's ego? The insider believes this theory is a misnomer as it mistakes ego for his passion for batting – a trait shared by other modern greats, Steve Smith and Kane Williamson.

A better way to view it, the insider says, is how you can frustrate Kohli, who loves to bat at his own tempo. The trick is to make him march to the ever changing beat of your drum.

In musical terms, Australia's approach in the spiteful series of 2017 was "ff", fortissimo and meaning very loud. Kohli, meanwhile, was left saying FFS.

Believing Kohli to be an "ego player" who likes to showcase his skill and stamp his authority on the contest, Steve Smith's quicks dared to pitch up to tempt the booming drive.

Kohli has been out to the drive more than any other shot (106 compared to 40 for a push, 38 to the pull and 36 working the ball), which is not uncommon for most batsmen.

His numbers against what Opta describe as the "length ball" should encourage bowlers to pitch up, particularly in Tests, where he has been dismissed 86 times at an average of 39.6 – well below his career mark of 53.6. This length also works in the 50-over arena by means ot slowing down his scoring rate.

"I know there was a real emphasis to attack him, be full and not be afraid to get hit for boundaries early on," spinner Steve O'Keefe, who played all four Tests that series, says.

"You could set the tone by knocking over the best player. Playing a shot on the ego, getting it full, put it across him, nick him off or attack the pegs.

The margin for error, however, is very small. Overpitch and you get destroyed, with Kohli averaging 80 in Tests to half-volleys and 128 in ODIs at a strike rate of 140.

"The window is narrow and the landing space is pretty small," Moody says.

Most fans in Australia would not have heard of Sandeep Sharma but the all-rounder has dismissed Kohli seven times in the IPL at an average of just over 10. Able to bowl 125 km/h "on a good day", Moody says, Sharma's strengths are his canny changes of pace and ability to bring the ball back into Kohli.

This works in the limited-overs formats only, Moody says, where batsmen are dictated to by the need to score. The closest Australia have to a Sharma is Kane Richardson, who has withdrawn for personal reasons, though his replacement Andrew Tye has forged a white-ball career through his variations.

Another school of thought in the limited-overs formats is to get to Kohli through his partner. This is where the game becomes more than just bat against ball.

Once Kohli is set, teams should work on keeping Kohli off strike, the insider says. Firstly, he cannot score and, secondly, he can get frustrated being at the other end – even more so if his partner is tied down. 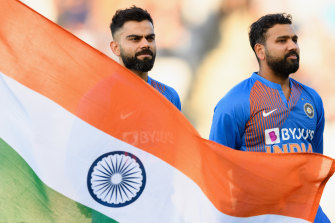 Kohli will be without the injured Rohit Sharma this summer.Credit:Getty

When his partner is facing, fields should be set to defend the single in the early and middle stages of the over before being pushed back to protect the boundary, almost encouraging the single so Kohli stays off strike.

This then increases the pressure on his partner, who, if inexperienced, may already daunted by the great player's aura, and forces Kohli to take more risks to maintain the scoring rate.

Kohli's most dominant campaign in the IPL came in 2016 when he had AB de Villiers, KL Rahul and Chris Gayle striking at 150, reducing the pressure on him to score as quickly. Only de Villiers remains and though Kohli still averaged 42 this year his scoring rate was a subdued 121 batting with unfamiliar faces.

With Rohit Sharma injured and MS Dhoni retired, Kohli will have to overcome the same hurdle in the upcoming white-ball internationals. He has played only 12 of his 248 ODIs and five of his T20s without either stalwart.

Aaron Finch should understand better than most how this can affect Kohli. He was one of those newcomers to RCB, losing his place in the side after a string of moderate scores.