Match report as Aston Villa’s four-match winning run comes to an end as Leeds move into third ahead of rest of Premier League games this weekend; Marcelo Bielsa’s side have 27 shots at Villa Park 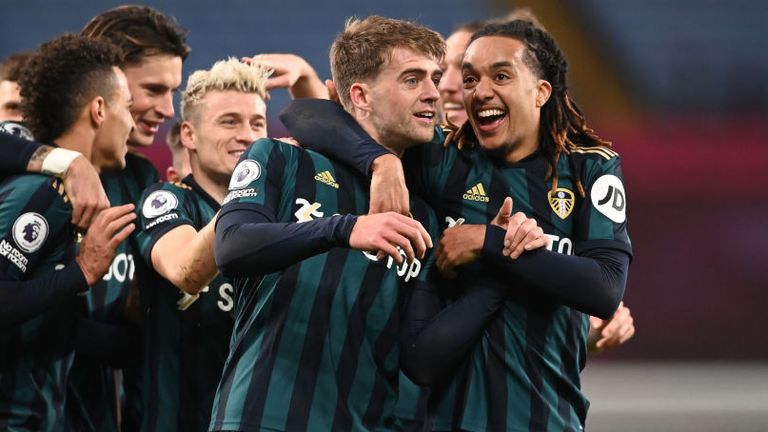 It was a barn-storming performance from Marcelo Bielsa’s side – who caught the eye with their lightning counter-attacks, neat one-touch football and 27 shots at Villa Park – despite a goalless first half.

Bamford had missed two glorious chances in the opening period, but soon put some demons to rest as he slotted home from an Emiliano Martinez’s save 10 minutes after the restart. The next two quickly followed – his second a sublime effort which found the top corner (66) before completing his hat-trick with a scooped finish into the far corner (74).

Villa will look back at some missed chances and wonder ‘what-if’. Jack Grealish had a shot cleared off the line by Luke Ayling in the first half before he and Ezri Konsa both went close early in the second period.

But Villa were ultimately unable to deal with Leeds’ direct play and miss the chance to go top of the Premier League table, remaining in second. Leeds are hot on their heels though, surging into third ahead of the remaining games this weekend.

How Leeds stormed to victory at Villa Park 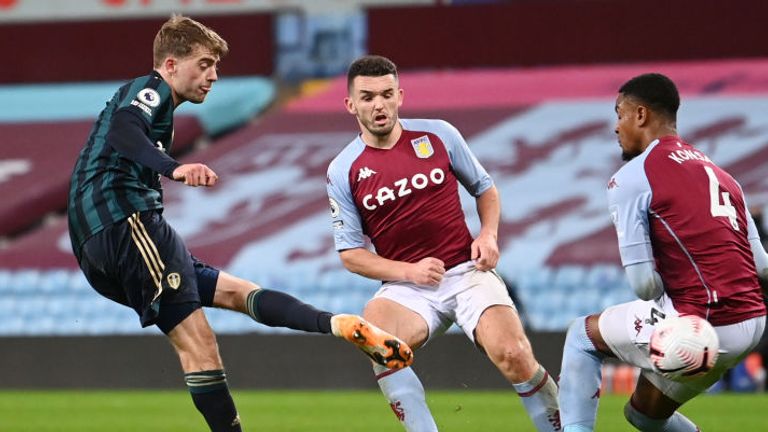 Leeds began like a team with something to prove after defeat to Wolves last weekend and dominated the opening 20 minutes. A curling cross from wing-back Egzjan Alioski was sent wide by Bamford’s diving header before another super ball from the North Macedonian found Rodrigo but his shot was turned behind by birthday boy Konsa.

But Aston Villa soon found their feet and had the best chance of the half in the 26th minute. Ayling lost out to Ollie Watkins on the right, and the striker’s cross was diverted into the path of Grealish by a flick of Trezeguet’s foot. The Aston Villa captain struck, but he was thwarted by his opposing number, as Leeds skipper Ayling was waiting on the line to boot the ball to safety.

Man of the match: Patrick Bamford.

Leeds then had a last-gasp effort to take a lead into the break. It was a classic counter-attack as Jack Harrison drove down the left flank before sending another super cross into the middle for Bamford. But the Leeds striker was unable to send his shot on target.

Villa had two huge chances to take the lead early in the second half. Grealish made a sensational solo run, working his way to the right of the area before striking, but Illan Meslier was waiting at the near post to save. The Leeds goalkeeper did so again soon after, tipping a Konsa effort from a corner over the crossbar.

Seconds later Bamford found the net for the first time and, unsurprisingly, it came from a superb counter-attack. Harrison picked out the run of Rodrigo into the area, but his initial effort was palmed away by Emiliano Martinez. However, Bamford was in exactly the right place to slot home the loose ball and put Leeds ahead. 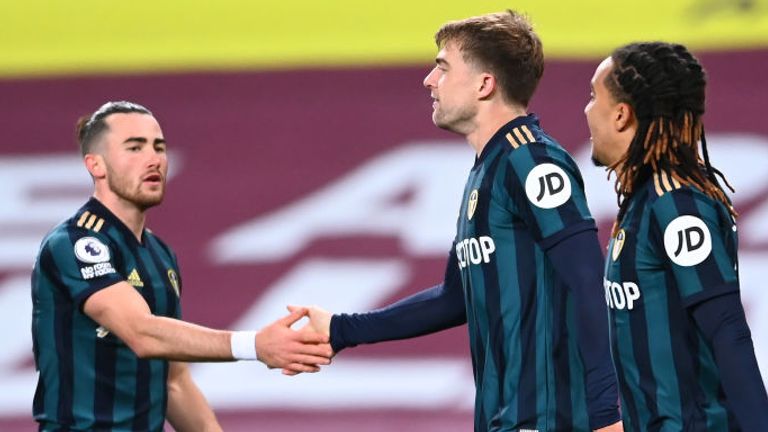 From then on, Villa barely had a look in and Bamford doubled the lead in the 66th minute. After a driving run from Mateusz Klich through midfield, Bamford was given enough time to work himself some space before curling a wonderful strike past Martinez.

But his third eight minutes later was the pick of the bunch. Helder Costa and Jamie Shackleton – who impressed after replacing the booked Pascal Strujik in the 20th minute – played a neat one-two before the Portuguese winger picked out Bamford inside the area. 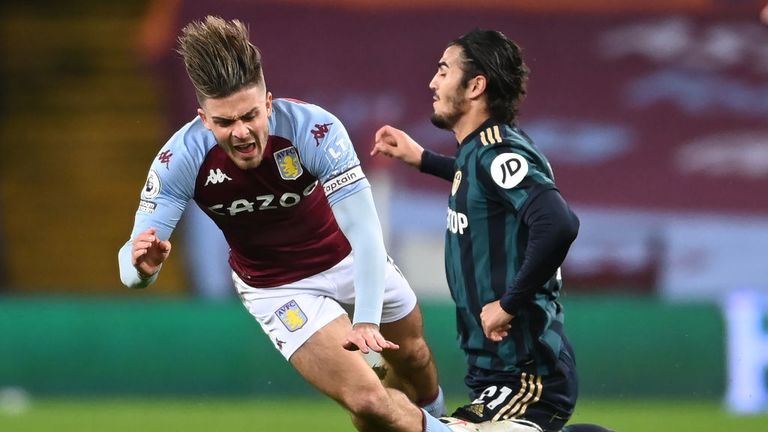 He took a few steps before finding himself surrounded by Villa defenders, but he managed to lift the ball over the players in front of him before finding the bottom corner to complete his hat-trick and a fine evening’s work for the visitors.

Man of the match – Patrick Bamford

3 – Patrick Bamford is only the second player to score in each of Leeds United's opening three away games in a top-flight league season, after Gordon Hodgson in 1937-38. Magic. pic.twitter.com/bBh300N59l

Bamford was guilty of some pretty big misses in the first half but, having scored in Leeds’ two away games so far this season already, he would surely have been confident of getting the better of Martinez as the game wore on.

That certainly came to be, and in stunning fashion. His first goal showed why he had been making those runs into the area and taking up positions in the first half, while his second two demonstrated his skills as a finisher, especially under pressure.

It was a wonderful hat-trick and maybe now, some might start to believe Bamford can cut it in the Premier League.

The Foxes have been an intriguing side to watch this year and have summed up how changeable the top-flight has been in the early weeks: they were fantastic in beating Man City, but were hammered by West Ham before the international break.

Even so, they have won three of their four games with a good start to the season.

Aston Villa were second across the course of the international break courtesy of a 100 per cent record in their opening three games, including the extraordinary 7-2 win over champions Liverpool last time out.

Here’s everything you need to know before kick-off.

The game kicks off at 7:15pm on Sunday, 18 October at King Power Stadium.

The match will be shown live on Sky Sports Box Office on a pay per view basis. Subscribers can also stream via the Sky Go app.

If you’re not a Sky customer you can grab a NOWTV Day Pass here to watch without a subscription and access the PPV option.

Villa are without Wesley and Tom Heaton, with Kourtney Hause a doubt.

Villa have yet to concede in the league this term after two wins from two, while the reigning champions have won three from three.

Both teams exited the EFL Cup in midweek and will want to continue their winning start to the league season, before the international break interrupts matters.

Ross Barkley could make his Villa debut, while the Reds are without Sadio Mane after he was diagnosed with coronavirus.

Here’s everything you need to know ahead of kick-off.

When is the game?

The match kicks off at 7:15pm on Sunday at Villa Park.

The game will be shown live on Sky Sports Premier League, Sky Sports Main Event and Ultra HD. Subscribers can also stream the fixture via the Sky Go app.

If you’re not a Sky customer you can grab a NOWTV Day Pass here to watch without a subscription.

Villa are without long-term absentees Wesley and Bjorn Engels, while Tom Heaton is on the road to recovery but unlikely to feature. Ross Barkley is in line for a debut, though it might be off the bench.

Liverpool are without Thiago and Mane due to positive coronavirus tests. Joel Matip and Alex Oxlade-Chamberlain are out injured, but Jordan Henderson is back in training and could be in the squad. Kostas Tsimikas is also a doubt.

Villa will make it tough for Liverpool and might revert to last season’s rather more defensive approach from the start, but the Reds should have enough to break them down even without their absent No. 10. Villa 1-2 Liverpool

Boss Dean Smith believes Aston Villa have given themselves the perfect platform for success after their summer spending.

Villa broke their transfer record to sign Ollie Watkins from Brentford in a deal worth £33million while also spending £20m on Emi Martinez and £17m on Bertrand Traore.

Ross Barkley joined on loan from Chelsea on Wednesday and, ahead of Sunday’s visit of reigning champions Liverpool, Smith is pleased with the squad’s foundations.

“It feels like a really good window,” he said. “It’s a lot easier when you only have a handful of signings to do rather than the 13 we had to do last year.

“I believe we’ve added quality to a more experienced team in the Premier League, having found it tough in the first season.

“I said at the end of last season that I saw an improvement from the majority of our players and now we’ve added quality to that core of the team. Overall, I’m really pleased with where we’re at.”

Villa lost their 100 percent win rate to the start of the season after slipping to a 1-0 defeat by Stoke in the Carabao Cup on Thursday.

They have still won their opening two Premier League games after beating the drop by a point last season and are also yet to concede a goal.

“It’s certainly helped everybody to be excited for the season ahead. Winning your first two league games gives you a kickstart and we need to make sure we continue that,” Smith told a press conference.

“It just shows that, defensively, we’ve continued what we did at the end of last season. We’ve only conceded two goals in our first five games.

“Defensively, we’ve got a really sound structure at the moment.”

Barkley could make his debut after being cup-tied for the defeat by Stoke while Kortney Hause will be assessed after being forced off.

Orjan Nyland is battling a back injury and Tom Heaton (knee) and Wesley (knee) remain out.