Brisbane Lions midfielder Lachie Neale won the 2020 Brownlow Medal in a canter on Sunday evening, one of the very few things that has happened as expected in this most unpredictable year of football. 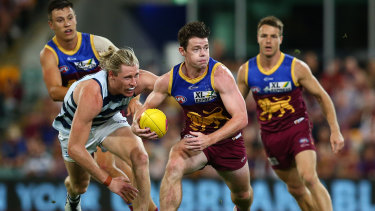 Fairest and best: 2020 Brownlow Medal winner Lachie Neale on the run for Brisbane during the Lions’ preliminary final loss to the Cats on Saturday night.Credit:Getty Images

His Brownlow triumph caps off a stellar campaign for the midfielder, who also won the Leigh Matthews Trophy for players’ player of the season and the best player award as judged by the coaches.

The 27-year-old shared the lead of the count in round four, went ahead clear in round five and blasted the field for the rest of the evening.

A four point lead in the count in round eight extended to a lead of seven votes (round nine), nine votes (round 11) and 11 votes (round 12), Neale winning the medal with two rounds to spare.

Neale polled three votes in consecutive games from rounds two to five, then again in round eight, nine, 11, 12, 16 and 18. 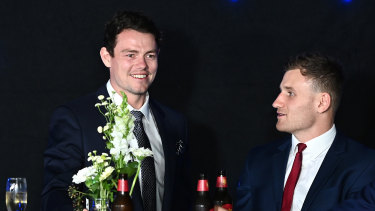 Soaking up the atmosphere: Lachie Neale (left) speaks to Rory Laird of the Crows during the 2020 Brownlow Medal count in Brisbane. Credit:Getty Images

He was an integral ingredient in Brisbane's run to the preliminary final, the club's first since 2004.

Born in Naracoorte in South Australia near the Victorian border, Neale played his junior footy at Kybybolite. He then played for Glenelg in the SANFL before being drafted to Fremantle at pick 58 in the 2011 draft.

That surprisingly lowly position in the draft was so because recruiters considered him small and a little slow to go higher.

Neale requested a trade from Fremantle to Brisbane at the end of 2018 and got there for pick six, 19 and 55, with Freo’s pick 30 and Neale heading to the Lions.

Meanwhile, if anyone needed anymore of a reminder of the precocious talent that is Matt Rowell, they got it on Friday night.

The 2019 no.1 draft pick from the Gold Coast Suns polled three votes in his second, third and fourth games to lead the race tied with Lachie Neale.

He was injured in round five and missed the rest of the season.

The count, conducted at Gold Coast's Metricon Stadium by AFL chief executive Gillon McLachlan, was unusual given the pandemic. 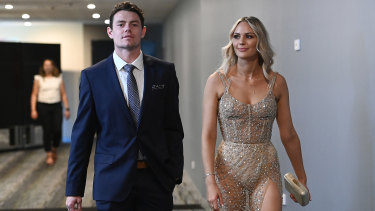 Glitz and glamour: Lachie Neale and his wife Julie arrive at The Gabba stadium in Brisbane for the AFL’s virtual best and fairest count.Credit:Getty Images

McLachlan and the AFL opted to avoid a gala evening on the Gold Coast with the majority of the league, instead just grand final teams Richmond and Geelong were there, as well as a few Gold Coast and St Kilda players.

Other players gathered at the Gabba, where Neale was, and Optus Stadium in Perth, Adelaide Oval, the Sydney Cricket Ground and television studios in Melbourne.

Players in Melbourne sat socially distanced in masks and suits, a far cry from the usual affair at Crown Casino.